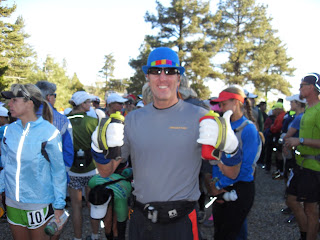 Ever tried to mix things up on a 100 mile run? Make it fun? Keep it interesting? Its not easy because it’s still, well, 100 miles.

Whether it was the copious amount of Cabernet and the gineormous hamburger I had for my pre-race dinner, the Vespa drink and mayo-smothered turkey sandwiches during the race, or the hours spent on my elliptical machine at sub-aerobic heart rates for many months, something worked for me at SD 100.

The only problem with wearing a blue clown’s hat made of heavy felt for 100 miles is that after just 13 miles your head turns into a boiling tomato. So my vision of running 100 miles with a clown hat to “mix it up” quickly faded, and I flung the circus derby like a Frisbee at Rob M when I rolled into the Red Tail Roost aid station.


The San Diego 100 mile endurance run takes place in the Laguna Mountains 57 miles east of downtown San Diego. 2011 was the tenth running of the race which, by this runners account, is every bit as challenging as Western States. Sure San Diego lacks Western States’ vertical gain and loss, but it more than makes up for this in its more challenging technical terrain. Yes San Diego lacks the stifling Western States’ heat, but it counters with a long sustained climb at elevation at the end of the race. Its no surprise that the average finishing times of these two races is within 3%.
One of the toughest sections of SD is an 8 mile climb which comes at mile 36, during the hottest time of day. I suffered here but loved the popsicle station around 2.5 miles into the climb. Here runners are offered a choice of a small or large popsicle, the large being the prized cherry/pineapple Big Stick I remember from grade school. Have you ever run with a Big Stick? I grabbed my ice cold 60 calories and quickly shuffled along.
As I moved through the aid stations my crew was doing a great job at keeping me fed and hydrated. My wife Jen, Laura W and Rob M served me what I’ve determined was my magic formula – Vespa Drink and Turkey sandwiches. I started on this diet at mile 44 and by mile 50 an unusual and sustained energy crept into my legs. My heart rate dropped to a consistent 130 bpm, my optimal fat burning zone. I no longer had to eat gels every 30 to 45 minutes to sustain my energy as I had early in the day.
Having now completed my third 100 mile race, I’ve come to realize that this sport is as much a selfless endeavor as it is a selfish one. On the grander scale, the hours of my solitary training to prepare for this grueling oddity are dwarfed by the hours spent by all the race volunteers and my crew and pacer who worked around the clock to watch my back. It is here that I give a special thanks to Rob M who, for the third time now, paced me to the finish line of another 100 miler. When I began to crack around mile 93, yelling loudly that we were sure as hell lost on this dark trail, Rob simply said “stop worrying about your map and just run”. At one point I was sure we’d missed a turn, thinking we’ve covered more ground than we really had. When Rob finally said “you think you are hauling ass and you’re just not” I knew it was time for me to shut up. Moments later we found our turn and began the long descent to the finish line.

As Rob and I approached the finish line I could see Scotty Mills, the race director, who I’d seen throughout the day offering words of encouragement to all the runners. Then I heard Jen and Laura W cheering for me, and I knew I had truly reached the end of this journey. Time was on my side on this one with a top 10 finish and a new PR of 21 hours and 46 minutes.

To my crew Jen and Laura W, all the volunteers (especially Bad Rats Scotty Mills and Tracy Moore), and most importantly my pacer Rob M, thank you all for making this journey one to remember.
at June 13, 2011

congrats, will! sounds like switching it up this time worked and you found the right combo. my coworker uses vespa for her ultras and swears by it. great job on another 100 and the new PR!!

Major kudos to you for finishing this amazing distance in such a great time!

Will, once again way to go. I would say you rock for an old man, but you actually rock.....period. Peace E

Well done! I'm in awe of anyone who can do 100m - let alone in that time! Impressive 'nutrition'- glad you enjoyed your new menu.

Totally awesome!!!! Congrats on the top 10 finish and the PR.

Hope you have a speedy recovery.

thanks all for your kind words. its nice to get a few ataboys once in while. yes, eric, an old man indeed. you could say I'm not hampered by youthful distractions. keep the faith runners!

Congratulations, Will -- that's a magnificent PR on an INCREDIBLY DIFFICULT course. And Top Ten to boot -- woo hoo!

you're a freak.Why do you run so much? Don't you own a car?

Very funny Bino. I've traded my car in for a pair of hokas and injinji socks. It's all about going green these days.

Great time out there.

yowzer - that is so impressive and might i add bloody inspiring.

i have recently starting running more consistently and am reading Stu Mittleson's Slow Burn - completely revolutionising the way I train/run. Have bookmarked your site...thinks its certainly gonna add value!

Hi Will, you're a machine!!! This event will be my very 1st 100 miler. I'm planning to do another 50 miler leading up to this race but can't decide which of the 2 would be good. Leona Divide 50mi or PCT50? What do you think? Any advise would greatly be appreciated. Thanks

Teezee, either Leona or PCT would be good, but PCT runs on part of the SD 100 course, so if you do that one you will get a much better flavor for the terrain you'll be on. I would do either one, but favor PCT.

Wow, there is a lot of worthwhile material above!