Not really. I'm still waiting for the Dec. 3 lottery. But I found this post from 2008, and it made me laugh. And I keep doing this stuff?

It is now official. I just submitted my entry to the 2009 Western States 100 mile endurance run. Although I was guaranteed an automatic entry as a 2008 participant, I was required to accept or decline the 2009 automatic entry. I accepted, as I expect 90 percent or more of the other '08 participants will do. Who wouldn't accept after being shut out of this year's race due to fires that rose from freaky dry lighting? What runner would train for six months, create animosity between his spouse, develop lingering and sometimes very painful injuries, become single minded to the detriment of his oh-so-important social graces, concoct visions of grandeur in his minds eye, talk excessively of race day tactics with 100 mile finishers, develop the disgusting yet important habit of stuffing TP in his pocket before embarking on early morning trail runs, grow a portfolio of running shoes to rival any Emelda Marcos poser, watch others stare at him with a look of utter confusion and discontent when they hear of his fixation, find ways to work out in the most miserably hot conditions, refuse to unpack a suitcase for a year, identify with terms like "beware of the chair" and "time on foot", write a blog about the absurdity of it all, only to choose NOT to reenter?

In Time or Location 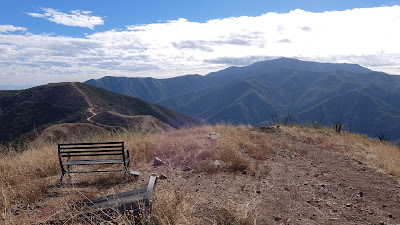 Ever stumbled upon a place, in time or location, where you just want to sit and stay a while? Where something, not sure what, makes you wonder why you can’t just say to hell with the noise, I’m tuning out?

This is Gary’s bench. I sat down here last weekend atop Bedford Peak, signed his journal and looked across Santiago Canyon as the clouds crept slowly over Modjeska Peak. 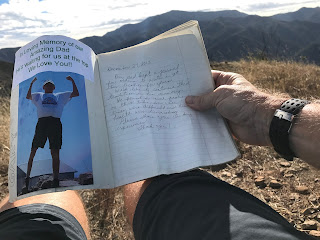 
Here it is again. The dreaded wait. A space in time saturated with anticipation and anxiety. Fantasy and foreboding. But who among us is willing to ignore the hype and hullaballoo? The lights flashing, the music blasting, the sponsors spamming?

I’m talking of the Western States lottery, of course. The good ‘ol cattle call that turns us typically stoic, anti-establishment ultra runners into a stampeding herd of steer rushing for the barn door so we get our shot at the big league.

Hmmm. Western States. Is it really the “big deal” everyone talks about? Or is it another overblown media sensation. I’m down on the media right now, but that will change as soon as they pay back the $billions they made during our presidential election circus, oops, I meant cycle.

Western States. The original. The granddaddy. The track meet. The lottery with odds of getting in dropping each year. Why bother?

Well, like everything in life, its complicated. To run Western is to run with a cascade of fanatic volunteers, throngs of supporters and well wishers, and gobs runners staking their claim on ultra running’s most storied event. But, again, is it worth it?

My first 100 mile race was Western States. I was drawn to it for all of the above reasons. I’ve run it 3 times now. Every time vowing to return to improve my time. Every time succeeding. The last time without crew and pacers, my first stop on the way to finishing the Grand Slam.

The hardest thing about running Western States isn’t the climbs, or the heat, or the canyons, or the humidity, or the punishing downhills, or even the dreaded “mandatory” pre-race meeting bestowed on all runners by the sponsors footing a big bill. No its none of these things. The hardest thing about running Western States is making it through the labyrinthine application process that has driven the odds of a typical runner getting in down to an all time low of 4.7%.

I get it. But I hate it. There are limited slots (thanks to the forest service) and more and more people apply each year. Everyone wants a bite at the apple of the granddaddy of ultras.

So here I sit. In that space in time.