"I once walked the six miles from my house to Kent Lake in less than 4 hours. But that wasn't my best time. My personal best is 8 hours and 15 minutes. That includes time resting with lizards sunning on the rock. Writing down a dream remembered starting at Mt. Barniby. Listening to woodpecker knocking herself against the tree that harbors Osprey's nest."

"Until you face your fears, you don't move to the other side, where you find your power." Mark Allen

He was probably the most talented endurance athlete of his generation - winning the Ironman World Championship six times, despite competing in and losing the race six previous times, always to his greatest rival Dave Scott. He worked hard for years but always seemed to come up short. Then something changed.

His quote on fear above really grabbed my attention. It is both profound and inspiring. Yet, reading it for the first time I couldn't help but wonder what Mark Allen - among the greatest triathletes of all time - could have ever been afraid of. Much has been written on his heart rate training philosophy. He mastered the Maffetone Method by becoming an early adopter of the revolutionary training technique that emerged in the 1980s.

It wasn't until he turned his focus to something he had neglected for years - his mind - that he was finally able to win the most grueling race in the world. In his first win, struggling to stay with his rival Scott during the run, he tapped into a certain vision - that of a 110 year old Huichol indian - to remove the negative thoughts in his head and untap the energy source and belief that carried him to victory. Allen didn't know this man in the image, who's name was Don Jose, and only saw his picture in a magazine just days before. The image clearly had a lasting effect on him.

To think that an image, so random yet powerful, could infuse energy into an athlete to such a degree as to change the outcome of the Ironman is remarkable. The mind, with all of its chatter, takes us on wild rides, in sports, at work and in life. If the chatter goes negative which it most often does, we go negative, and find ways for ourselves not to perform at our true potential. But if we can quiet the chatter and just focus on what we are doing in the moment, we open the door to our true potential, unhinged from the thought barriers that cloud our mind. That's when we enter the flow state.

Getting Back on the Elephant 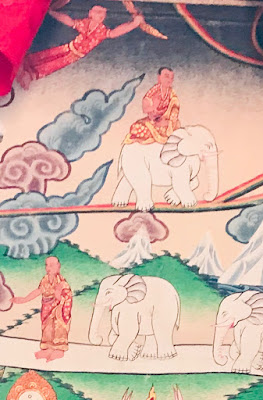 I wrote recently about the relationship between the elephant and the monkey. And how the elephant follows the monkey aimlessly, to random places, for no reason. The elephant, of course, is the mind - my mind at the moment - chasing the monkey, which is nothing more than distracting thoughts we are confronted with in our daily lives. Hmmm...the LA Angles are in second place. Can they hang on? Why did I run in those zero drop shoes again? Why didn't I remember that they always cause a calf injury? I really need to drop 10 pounds. The list goes on and on and on...prime mind wondering.

In my case, the monkey and the elephant found their way to this blog. They were quickly engulfed in a quagmire of more random, rapid fire thoughts. Hmm....how long have I been writing this blog? Does anyone even read it? Most of the posts these days aren't even about running. Why is it called An Ultra Runners Blog?....more wind wondering.

It's been nearly two years since I competed in an official ultra event. Sure I've done a few shorter distance events and some good long runs. But no ultras races. My elephant has been wondering.

I'm beginning to think that the simple act of preparing for and showing up to these longer events forces me to sit atop my own elephant.  And once I'm up there, I'm committed and in control again.

I think it is time to get back on the elephant. And say goodbye to the monkey!

Skyline Trail - On a Gravel Bike