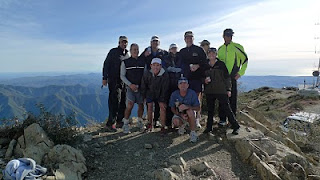 What started six years ago as a dubious quest between two runners, has now grown to an annual pilgrimage; a 32 mile holiday journey from the edge of the Pacific ocean to the top of Saddleback Mountain, Orange County’s highest point at 5,687 feet. On December 19, 2009, ten of us leaned over and touched the cold, blue water of the Pacific Ocean then turned to make our way to the summit. This year’s Saltwater crew was the largest to date, with six returning runners and four first timers. Also Included in the lineup were two female runners. 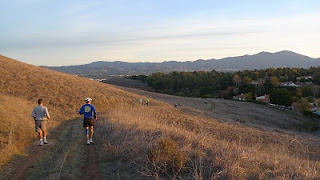 Unlike last year, we started under a dry, pristine sky. Darkness hung over us for most of our trek through El Moro canyon and the winding single track below the toll road. Leading the charge was Kevin S, who just a few weeks earlier had announced via email and Facebook that he had scouted and marked the trail along this section. Kevin’s one assignment as a newbie was to see the group safely through this section. However, when I realized Kevin and the group had run right by the turn and were lost, I could only wonder what the little guy had been smoking. 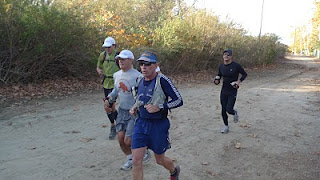 The next section usually brings some of the most breathtaking scenery, as the sky fills with yellow, orange and then deep red from the rising sun. We all made our way over the ridge and down to Laguna Canyon. But with runners, of course, nothing is sacred, especially when the moon is rising (and I’m not referring to the celestial moon here). When nature calls folks, what can you say? 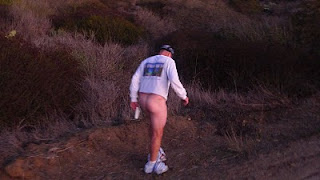 We moved easily through the Serrano section of the run, with the normal stops along the way. Thanks to our hardy and ready crew Dawn and Trina, nothing was missed, except for an “embarrassing” moment for Bino when Trina was picking up ice (we’re all winners Bino!). Fast forward to the Skate park, where Al, Dawn, Trina, and Marshall met us around this midway point, a good transition for the more difficult terrain to come. 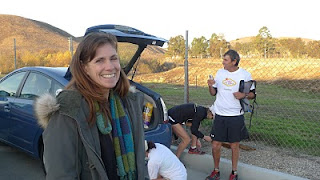 It can be said that life is comprised of the little things, those brief moments we don’t notice at first, that we remember in the end. This year’s Saltwater 5000 didn’t disappoint. 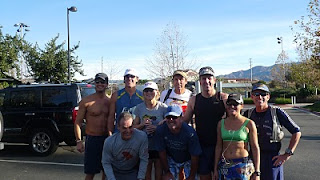 As we climbed up the infamous dreaded hill, the sky seemed to open up before us, and presented some of the most amazing views I’ve seen in my 40 years in the OC. The higher we climbed, the farther we could see. Once on the mountain, every turn seemed to present another unbelievable view. At such an altitude, we stood well above the curvature of the earth, making San Clemente island appear larger than ever. Snow topped peaks of the San Bernardino and San Gabriel mountains stood beside us, lending to a panoramic playground. 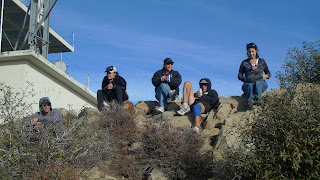 I’d like to say congratulations to all the runners this year, especially Laura who worked long and hard to prepare and get through this day. And to Bino, who also trained specifically for this year’s Saltwater. Seeing these two getting to the summit was sweet. Seeing Laura and her dad, two generations, making their way up Modjeska grade trail was a special moment. And we are all honored to have Gerry, our master, who at 68 years young raises the bar every time he steps foot on the mountain. Fellow first timers Kevin, Joe and Sue ran very well, as did third timer Jeff D. Keeping the faith is also a big part of Saltwater, and I was happy to share the trail yet another year with Jeff and Rob.

There There, Marathon Snobs

Today I was thumbing through the January/February 2010 issue of Running Times. I came across the following quote which was also carried in the New York Times:

“It’s a joke to run a marathon by walking every other mile or by finishing in six, seven, eight hours. It used to be that running a marathon was worth something—there used to be a pride saying you ran a marathon, but not anymore. Now it’s, ‘How low is the bar?’” (Adrienne Wald, a college cross country coach).

Yo Adrienne, please reboot your ego. Hopefully when you login again you will know, as a runner, what running is really about. If you don’t, you should read a few books by George Sheehan, who taught us that running is just as much about self awareness as it is times and competition. Sheehan once wrote that “the mind’s first step to self-awareness must be through the body”.

If you still don’t understand what running is about, then I suggest you go out on a Sunday and volunteer as a support crew at the finish line of a marathon. But don’t quit after the fast runners are done, wait there until the 6, 7 and 8 hour finishers to come through. You will likely see people who are in their 60’s and older. You might even see people who’ve never done anything athletic in their life, some of whom have struggled for years with physical or emotional problems. When these runners cross the finish line after battling for 26 miles, look into their eyes. When they look back at you, tell them what you really feel.

We runners are all individuals, and we all come in different shapes and sizes, and with varying abilities and ambitions. A fast pace for one, is ultimately slow to another. But we runners share one thing in common, something we should be loath to forget. When we run, we feel alive.
at December 13, 2009 15 comments:

I’m really not the superstitious type. In fact I laugh at some of the superstitious things people have done to get an edge. Like Michael Jordan wearing his college shorts under his NBA uniform. Hah! Like that really helped him. I wonder if he wore them inside out? Because its said that clothes worn inside out bring good luck. Ok, lets get real here.

When I walked out the door for a run this morning, I was sure to bring my blackberry, because the 2010 Western States lottery was about to be held. There was no way I could wait to see the results of the lottery after my run when I could see it during my run using the web browser on the device. It was, after all, the same blackberry I used to see my very own name selected in the 2008 lottery. Superstitious? No way.

Today I was also sure to wear my Western States sweatshirt for my run. It only made sense because I’m in Chicago for the weekend and its 20 degrees outside with a wind chill. Sure, I could’ve worn my usual long sleeve shirt with a wind breaker, but today was a special day. It’s the Western States lottery. Superstitious? Nope.

As I was running along Lake Michigan, the clock counted down until it struck 9 a.m., the lottery had begun. I looked up and saw four Canadian Geese fly directly over my head, and the song Right Here by Jesus Jones started. Are these good signs? I don’t know, but they couldn’t be bad. I continued on my run around Soldier Field, checking my blackberry every mile or so.

Turning back toward the hotel, the wind was at my back, and my stride seemed effortless. I stopped, and glanced at my handheld. I scrolled down through the last names and there it was, my name! I’m in! My arms lifted to the sky, as I savored the moment. I quickly called my wife. “I’ve got good news, and I’ve got bad news, which do you want to hear first? The good news, I got into Western States again, and the bad news, I got into Western States again!” We laughed together knowing what would be in store in the months to come.

As I was heading up the elevator I glanced at the mirror. Something was sticking up on the top of my running cap. As I looked closer, I realized it was the tag. I’d been wearing it inside out the whole time.