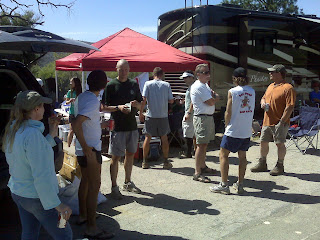 As the sun rose over the Laguna Mountains yesterday morning, I was locked in stride with a pack of runners climbing the long, meandering single track of the PCT 50.  After crossing Kitchen Creek road we pushed upward more, then turned northward.  As Moby's "Whispering Wind" played in my ipod, I looked across the sun-drenched Cameron Valley that appeared before me like a freshly painted mosaic. This, I thought to myself, is why I run.
The PCT 50 mile is run on deceptively difficult terrain.  Packing mostly rock strewn trails, heat, long climbs and 6,000' elevation, the PCT 50 easily trumps the Leona Divide 50 on a scale of difficulty.   But what this course lacks in comfort, it surely makes up in splendor.  Dramatic and panoramic views lurk throughout this mountainous run, constantly beckoning runners for a precarious glimpse as they run along the rocky trail.
My pack of runners stayed together until the first aid station at Cibbets Flat campground, but started to splinter as we made our way up the steep fire road leaving the aid station.  We continued climbing until around mile 14, where we pierced 6,000' elevation.  Knowing I was going to be running at this elevation for several hours to come, I slowed things down a bit.  Long runs like this can bring on a host of ups and downs, both mental and physical.  I stayed focused on my water, salts and gels, consuming each meticulously on the hour and half hour. It was good to see Scott Mills at the Todd's Cabin aid station.  We traded a few words about Rob M and probable snow conditions at this year at Western States.
As the day wore on, this trail took its toll on me.  I went down face first after kicking an invisible rock around mile 28, punched a huge boulder with my right hand to break a free fall around mile 40, and rolled my ankle a couple of times (ok, this is getting old).  After last year's Western States ankle episode, I'll admit I have a creeping sense of paranoia about the subject.  Are my ankles at the mercy of every trail I run? I have a sneaking suspicion that the cause might well be the lofty soles of my Asics trail 2140s.   They're acting more as rickety podiums than soles that ground my feet on uneven terrain.  Next step?  Check out the Inov 8 line which carries a boatload of stable, low-profile shoes designed for trail running in every condition.  More to come on this.
Working your way up in elevation on an out and back run like this would lead you to think it's a quick way back.  But don't be fooled.  Most of the single track is riddled with rocks, making it difficult to get a rhythm on the long 14 mile decent.  But as I neared the finish line, I knew this was a good day for me.  My homework is beginning to pay off, allowing me to run all the climbs, stay on a tempo on the flats and downs, and  capture 4th place overall.

"I stand in the way of the things I can be"

Congrats Will! You continue to amaze me! Glad that the ankle didn't cause you more issues! Recover well, and savor your 4th place finish! Awesome!!

Great job will. Sounds like a beautiful place to run.

Great job Will...What was your time??

to all, thank you for your good wishes...it means a lot to hear from you. it was a great day and I really enjoyed PCT 50.

Good job out there! I would melt out on a course like that.

Checkout the Inov8 230s. They are my go to shoe. I wear them pretty much all the time at every distance.

It looks like you will pop a good one in June!

Will, I so enjoy your writing. When you decide to quit your day job your next career, as a professional writer awaits.

BJB2--thanks for stopping by the blog, hope all is well on the Farm. Smooooookkeeey!