It has been said that running (exercise in general) is therapy for the mind as much as it is the body. I can’t think of a year other than this year that this would ring  more true. I would be in a much darker place during this time of isolation if I wasn’t doing my short but potent 3 to 4 mile runs around my neighborhood several times per week. Thank you running...for keeping me on the sane side of neurosis. 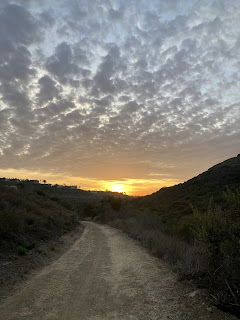 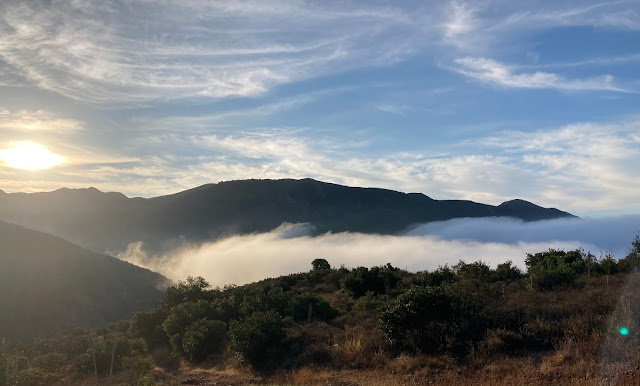 Been a while since I've been out running on the mountain (one year?). I don't know how or why I've let this essential activity slip away for so long. I was reminded of how much I miss it after climbing with Kevin S above the clouds. We were shrouded in marine layer until we punched through the ceiling to see blue sky and sun about 1'000 up. Chalk today up to a spiritual re-awakening...time to return to the temple.

Reach Out and Touch the Pepper Tree

If you are ever in need of a reminder of why getting out of the house to go for a run is better than staying inside and grinding a peloton or treadmill, try running under a pepper tree. When you do, reach up and grab a handful of leaves with berries. But don’t pull them off the branch. Rather just rub them around in your hand. You should be able to do this w/out breaking your stride - just half a second is all you need.

Once you do this with the leaves and berries, bring your hand to your nose and smell the peppery aroma. It always gives me a lift when I can get a little taste of nature in this increasingly virtual world. 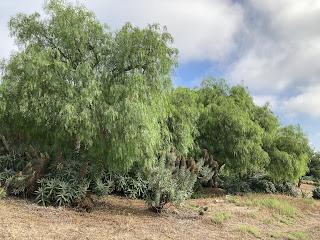 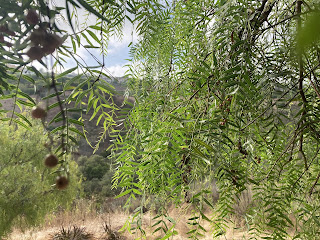 Getting What I Need

It's strange, this pandemic thing, especially what it has done to the sport of ultra running. All those races cancelled. It's enlightening as well, this pandemic thing. No races, no obsessive training, no blogging ;-). But really, I'm a new believer in running just to run, vs running to train for a big 50 or 100 mile race that takes over your life and your family's life.
My new routine is to lace up a pair of hoka Clifton road shoes and just go out for a 4 to 6 mile run. That's right. 4 to 6 miles. In fact I rarely go over 5 miles. But here is the deal. This gets me everything I need -- Solitude. Tranquility. Wisdom. Clairity. Fitness. Energy.
Need I say more?
Get out there people.
And keep it real!
at July 31, 2020 No comments:

Email ThisBlogThis!Share to TwitterShare to FacebookShare to Pinterest
Labels: energy

"A fanatic is one who can't change his mind and won't change the subject."


There comes a time when one should change paths. That time, for me, is now.

It was late July 2016 when, like a dope, I discovered the race I had just completed - the Tahoe Rim Trail 100 (TRT 100) - was NOT a qualifier for the Hard Rock 100. Why I didn't just look at the list of Hard Rock qualifiers before entering the TRT is, well, part of the dope designation. Maybe I wasn't really considering Hard Rock until after I ran TRT, or maybe I just assumed that TRT was a qualifier. Whatever. That was 4 years ago and I just don't remember the details.

But then I became obsessed. Probably because running Hard Rock is, in the ultra running world anyway, considered a right-of-passage. Why this is the case I'm not totally sure but it probably has something to do with 30,000 feet of climbing in the San Juan Mountains, altitudes that surpass 14,000, and a tradition of difficulty. The race makes the Leadville 100 look like high school cross country course.

Fast forward to 2017 when, unlike my inner dope, I did my homework on which races were qualifiers for Hard Rock and signed up for Bighorn 100. Notwithstanding the nightmarish conditions of that race, I finished it and promptly sent in my application to the 2018 Hard Rock lottery. The odds weren't in my favor. I recall something like 1 in 1000.

So in early 2018 I started to prep for another Big Horn to qualify for the 2019 Hard Rock lottery. But, just as my training miles began to ramp up, I stumbled onto a nuance about Hard Rock qualifiers  -- they are eligible for two years. I promptly cancelled my plans (and training) to race Big Horn and entered the 2019 Hard Rock lottery. Again, no dice. Like a robot, I then set my sights on finding another qualifier in 2019. But then the 2019 Hard Rock was cancelled due to excessive snow. All 2019 runners were granted entry to the 2020 Hard Rock, which meant the earliest I could run this elusive race would be 2021, assuming I qualified.

So last year I signed up for the Tahoe 200 miler, thinking why not? If you're going to go long, why not go really, really long. Unlike the TRT 100, the Tahoe 200 is a Hard Rock qualifier. As the race approached, I was out on a training run high in the San Bernardino Mountains. From the corner of my eye I spotted a shadow on the mountain road. Only there were no trees or anything that could create a shadow. I stopped to look around. When I looked up I saw the silhouette of a hawk hovering between me and the sun high in the sky. The shadow seemed to be tracking me for several minutes along that mountain road. Surreal.

When I returned from that run I had a vision, and it didn't include running the Tahoe 200 mile. It took me instead to the Mogollon Monster 100, a beast of a run in the mountains of Arizona. This one turned out to be my worst performance in my less than stellar ultra running career. I finished, but it took me 30 hours. Yes, the course was absurdly difficult with more technical terrain than I've ever encountered, but it really had me questioning why. Why am I doing this? Why am I out on these trails, crawling up near vertical terrain when I could be actually running on a trail?

I think it is time to change paths, find a new trail. One that doesn't involve toiling up and down mountains and always seeking vertical in training, just to get shut down by a lottery. Maybe it is time to just run again.
at May 23, 2020 1 comment: 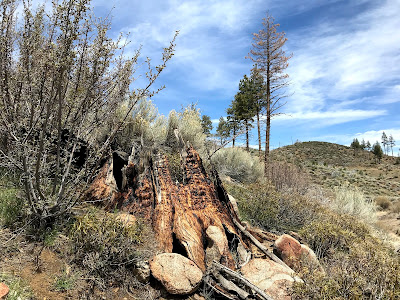 A Positive From a Negative 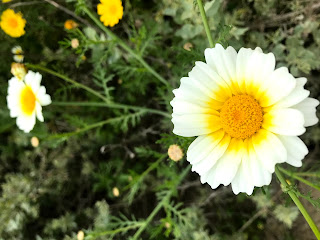 When I started my run today I was replete with anxiety. Being held up in the house for days and dealing with this "new normal" was getting to me. As I ran along I started to think about some of the positive things that have come from the current shut-down. For the first time I ran with a mask, through some pretty dense shrub where pollen was floating in heavy doses around me. It was then I realized I was protected from this airborne nuisance, so often an allergic trigger for me. No more wheezing! Would I have ever thought to wear, let alone run with a mask before? I’ll mark this one down as a positive from a negative.
at April 20, 2020 5 comments: 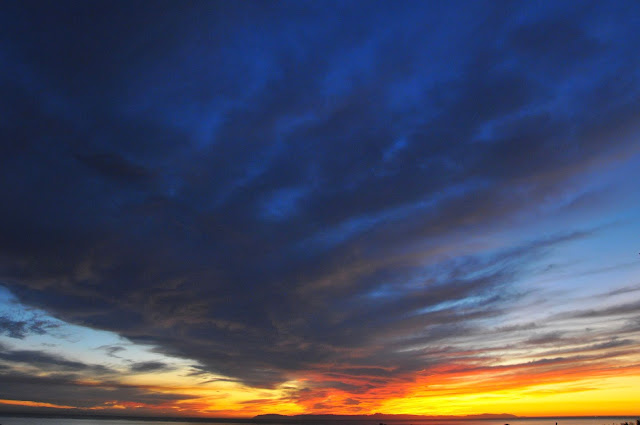 Now that major races are, or are soon to be, shutting down due to the Corona virus, its high time we appreciate things beyond running. I'm adapting quite well to this new normal. Just looking at the sky does wonders to the psyche. Try it, I think you'll like it.
at April 11, 2020 1 comment: 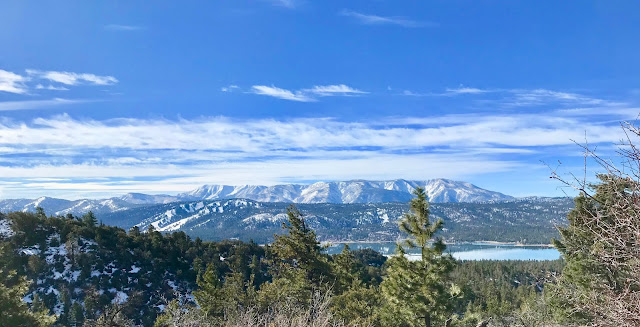 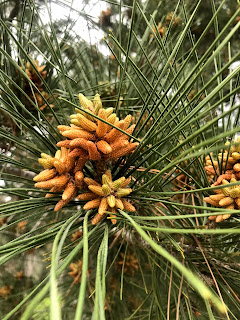 Sometimes the most routine trails reveal the most interesting things. All you have to do is pause, and concentrate on what's right in front of you. It's amazing what appears. That's life, really. 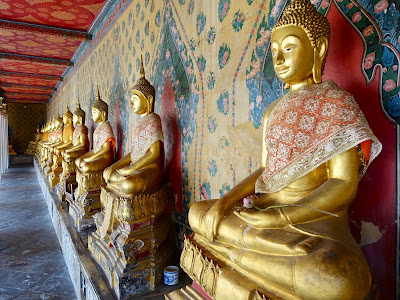 Buddha is often quoted on the topic of being "present." He, by all accounts, wasn't one to dwell on the past, saying poignantly that "there's only one moment for you to live, and that is the present moment." In other words, forget about the past, and just focus on being present in this moment.

My concern with this is that I have too many memories of being "present" in the past that remind me of how important it is to be present.

I remember, for example, pacing a friend during a 100 mile race. It was late at night, and it was starting to get pretty cold as we climbed toward the top of a mountain. I saw a glimpse of another runner's light above us. As I looked up, I noticed snowflakes falling gently from the sky. Yet, there were no clouds, just snowflakes. I remember being very present in that moment.

There was another time, during Western States 100, when I came into the Forest Hill aid station. I was really beat up, wondering how I was going to finish with 40 miles to go. Then I saw my family and crew, and my youngest daughter took my hand and walked with me for a while. I'll never forget that moment. Precious.

Yes, living in the present is indeed the best way to be "present." But remembering moments of clarity in the past, those precious seconds etched so vividly in our minds, are proof of presence, and not to be forgotten.
at February 09, 2020 No comments: 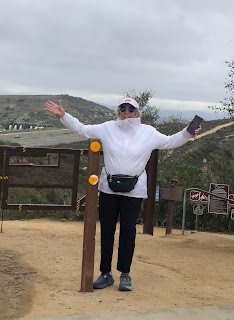 A few months ago you told me you were tired of walking around the neighborhood. You said it was boring, and that you and Eileen were going to start getting out on trails. I have to say, initially, I was a little nervous about this. Looking back, I'm not sure why. You've now tackled Buck Gully via the long route, the steep Bobcat trail, and now the full 2+ mile, 400' climb to Coastal Peak Park from the fire station.

Recently, after one of your hikes, you told me how beautiful the mountains were. That the recent storm had left them covered in snow. It's really hard to get up and out there so early in the morning, you said, but all you have to do is think about how good you feel when you finish, and that overcomes any doubt.

You recently sent me a picture of the trailhead at Buck Gully before sunrise. You guys were about to begin your hike. Most would look at this and say, what's the big deal? Not me. Understanding why someone would take a random picture of a dark trailhead before sunrise requires a special connection, a kindred.

Sometimes I wonder if I'm too old to keep doing this running thing, and if I should just turn my attention to more age appropriate activities, like golf, or tennis, or woodworking. Then I remember how you used to let me explore the hills and canyons around our home as a child. I can still remember those canyons like yesterday, and the pollywogs, and the lizards and the hawks over my head. Thank you for letting me loose back then. I don't think I would've done well in a cage.