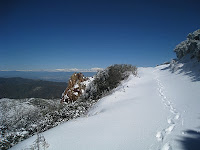 Orange County California.  Known for its warm weather, sandy beaches and oceanside communities.  But most don’t know that the highest elevation in the OC exceeds that of Denver Colorado.  That’s right, the OC trumps the mile high city 5,689’ vs 5,280’.

When Rob M and I started running Harding Trail for a 29 miler to the top of Modjeska Peak and back, we looked up and saw snow on the ridge some 4’000 feet above us. “Think we’ll see much snow”? I asked Rob.   He didn’t seem as convinced as I that the snow would be a factor today.  Wow!  Was I right about the snow!  Once we approached the Main Divide road the snow was a foot deep and we became very determined to get through it. We trudged like yaks for several miles in OC’s finest powder!

There is something to be said for running into thinner air.  Starting low and going high.  900’ to 5’500’.  Getting off the roads.  Falling face down in the snow.  Keeping going while things aren’t going too well.  Then rounding that last turn to see that small place you’ve been struggling to get to.  Then to get there!  Wow.  Every time, every opportunity, I will relish it.


Here are a few photos and a short video of the journey. 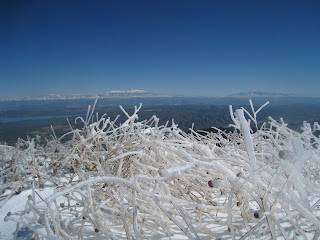 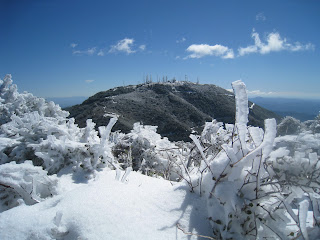 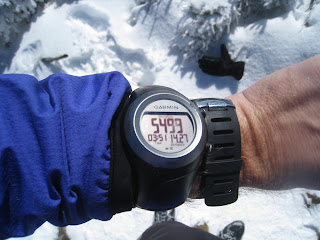 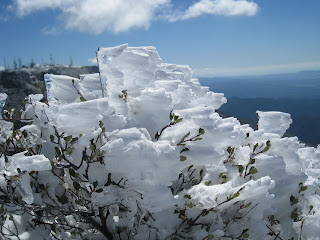 Untitled from Will C on Vimeo.

I'm getting ready to step outside for a 5 to 8 miler.  The range is due to my lack of confidence in how I'll long I'll last out there.  It's 21 degrees and still dark out where I'm at in the So Cal mountains and according to Weather Underground, where I am is the lowest temperature in the State of California.  Before I go I'll be strapping on my Yak Trax which (hopefully) will keep me safe as I tread on black ice under the dark sky.  I'm at a loss as to how you Canadians and snow bound Americans do this every day in the winter.  Keep on Yak'n folks.
at February 24, 2011 6 comments:

Sometimes you just have to liven things up a bit.  Today Rob M and I kicked a tennis ball for 6 miles along the beach during a 20 mile run.  Sprint, stop, run, in the water, out of the water...great strength builder.  You should try it sometime!

This last weekend I tried a new training technique that should hold some promise for some long races this season.  I was in Chicago for the weekend which is nothing but flat and mostly road/asphalt running (and lots of snow!).  This stuff really tears me up if I'm running anything longer than 2 hours.  Since I needed to get 30 miles in I did a 10 miler on Saturday and a 22.6 miler on Sunday.


I knew I was going to be on my feet for up to 4 hours on Sunday so I decided to try something different than the typical long grind pavement.  I decided I'd do 15 minute/5 minute run/walk combination the entire time.  I've heard several accounts of ultra runners doing planned walking like this during races with very positive results.


How did it go?  I think it is something I'll be doing on a regular basis when I'm putting in longer aerobic runs.  There are many benefits to the run/walk approach.  First, I'm able to keep my running form during the entire time.  Turnover, leg lift, and stride, the things that tend to get sloppy on longer runs, are maintained with the run/walk approach.  Another benefit is my average heart rate remained pretty low, 132 bpm, even in during the later miles.


Another benefit of the run-walk technique is recovery.  Neither during the run nor after did I ever feel the soreness normally associated with running on roads.  My legs grew tired, but not enough to slow my pace or change my form.  Run-recover-run-recover.  Unlike when I finish most long runs, I felt relaxed and ready to keep running.  Relaxed enough to enjoy a Primonti Sandwich and a Guinness before the Superbowl at Dunlay's on the Square!

I'm going to cancel my trip".  The words rolled off my tongue as I sat in front of the tv  monday night watching the "mega" storm pummel the Midwest on it's way to the East coast.   But when I boarded the plane to New York tuesday I decided the media was hyping the storm for ratings, and, after all, if my plane took off, surly it would land!

This week brought another road trip I've grown accustomed to as a working runner.  This time to New York City and Columbus, Ohio for work and then to Chicago this weekend for a quick vacation.  Despite all the miles in the air I managed to get some miles on the ground. I showed up in  New York without any running shorts but i didn't let that slow me down (a little cold for streaking so I had to buy a pair).

I think traveling as a runner keeps me 'green and growing', a preferable state than, say, ripe and rotting.  On this trip I was able to meet a very cool runner/ blogger, Eric G, who finished three 100 mile races in 2010 to qualify for Badwater (http://justamiletogo.blogspot.com).  He did this despite crewing a runner at Badwater last year under the stifling heat.  "It made me want to do it more", Eric said to me as we sat at a bar musing about ultra running and other necessities in life.  I met Eric's dad on a plane to Milwaukee a year ago who told me that his son ran those crazy distances.  I've been following his blog ever since and recommend it for some good  running inspiration.

After running central park on weds evening, I gained some valuable experience running at Columbus airport on Thursday afternoon.  I had several hours to kill so I bought a cheap pair of Ohio State sweats, changed into my running gear in the handicap stall in the mens room, put an extra shirt in a plastic bag, checked my bags and then stepped outside in 12 degrees to knock out 5 miles.   Not the ten I would have done at home, but 5 less that I have to do this weekend on vacation to hit 80 this week.

Now I sit on Delta flight 1327 to LAX listening to Pandora uploading this post via wifi.  This gig is kinda fun!