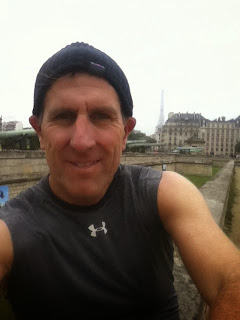 I was on my way to completing a 7.5 mile run when I passed Notre Dame on the river Seine in Paris and I was feeling a bit perky about my training. You know, animated, bouncy, bright, bright-eyed and bushy-tailed, bubbly, even buoyant (reverso.com). It's not always that one feels perky about training so I thought I would indulge myself by wondering a little.

Do you ever wonder? You know, think about what might lie ahead of you if you did this a little more or that a little less? And so I wondered. I wondered what would happen if I approached running  more like a religion instead of a hobby. i wondered what would happen If I looked at training more like a mountain to climb, rather than a flower to be plucked. I even wondered if I had the discipline to move into a space I had never been before, where I would take nothing for granted, especially what I've got still waiting under this skin.

Ok, I'm not trying to get woo woo on you here, but I'm just saying I think it is good to wonder sometimes. I think it might even lead to things that, today anyway, I can only imagine.

What Did Your Ancestors Eat?


Ok readers. I'm stepping up my game. Gone are the posts that are thought (if not yawn) provoking subjects on  ultra running and philosophy. In are posts that roll off my thumbs devoid of my better filtration.

For the next several days I'll be posting daily from my phone about something that happened to me in Paris, France, while running or doing something random. Yes I'm in Paris. The City  of lights. I'd post a picture but my laptop is dead and the three prong cord doesn't fit the two hole euro AC adaptor. Damn.

On another note, have you ever eaten a cows colon? I did today. It wasn't planned or anything I do a lot. It just kind of happened. I ordered grilled sausage from the menu  at a dainty kind of cafe in the Montmarte district, known for an eclectic vibe. It wasn't long before the waiter was shuffling down the cute little sidewalk with our plates of food. I was pleasantly surprised at how quickly our food was prepared and delivered to our table.

The scene was a little hectic though, only because a large group of  customers were taking their seats next to us while a street musician was strutting up and down the row of tables asking for money. I'm normally not one to judge but just at that moment I smelled what I can only describe as a bag of stale urine, you know, like the smell of a public restroom. The stench was so pungent it was like I was the  very last guy in the porta-potty before the all-city 5k and momentarily forget to breathe through my  mouth.

It was when the waiter set the food on the table that I was looking most intensely for the culprit. Was it the musician? He did, after all, have the look of an old, wondering gypsy. Yes, it was him! But there was one problem with this theory. He was long gone and the stench was still enveloping me.

I finally resolved to accept the smelly situation was out of my control and reached for my knife and fork. As I cut I noticed this wasn't like any sausage I'd eaten before. It looked strangely un-sausage-like. The inside was not grounded-up bits and pieces of whatever.  This was something still whole, just wrapped and rolled to make it look like a sausage.

By the time the small morsel was in my mouth, a survival alarm went off in my nostrils. As I chewed it occurred to me that the stench that was all around me had nothing to do with traveling gypsies or unbathed Europeans, and everything to do with the tube that was laying on my plate, and was now quickly dissolving in my mouth and about to make its way down my throat. As I chewed the mustard I dipped this thing in slowly gave way to a flavor that I simply cannot find words for.

In retrospect, why my gag reflex didn't kick in has me baffled but I'm thinking, at some point down my hereditary chain, my ancestors must have dined on cow shit, or possibly used it for a sauce to strengthen their collective immunity system. Is it just me? Or does the idea of eating an organ who's sole purpose is to create, store and pass feces from the body seem, well, just not healthy?

I needed to test my hereditary theory so I decided to ask my wife, much more the connoisseur of fine if not obscure foods, to give the local delicacy a whirl. I surmised that if she couldn't swallow this thing without gagging then my ancestral shit eating theory might have some legs. And sure enough, her gag reflex took over immediately upon impact from the latrine laden organ soaked in mustard.

...The French call it andouillette and, according to wikipedia "it is rarely seen outside France and has a strong, distinctive odor related to its intestinal origins and components. Although sometimes repellant to the uninitiated, this aspect of andouillette is prized by its devotees."
at September 27, 2013 7 comments:

The Cult of Science 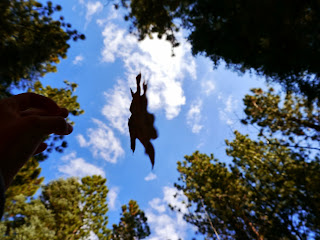 When you said that the world was flat, you mesmerized us with images of ships sailing off the edge of the earth. But then someone sailed beyond the horizon and into the new world.

When you said that breaking the four-minute mile was impossible, you frightened us when you said we would die in the attempt. But then Roger Bannister crossed the finish line in under 4 minutes and lived to tell about it.

When you said that we endurance runners need to drink water even when we are not thirsty, you told us that the alternative would be heat exhaustion, heat stroke or possibly death. But then people started to die from hyponatremia, a deadly condition brought on by excessive hydration.

Please don’t misunderstand me here. Without your discoveries and breakthroughs , we humans would still be living in the dark ages. The billions of lives your work has helped to save would have wasted away in misery and hopelessness. We owe you a lot for what you have done for us humans.

What I have come to realize is that, as a product of us, you are just as prone to imperfections, mistakes and failures as we are. And yet we still look to you as the beacon of truth. Without a scientific explanation, we’ve been told, it just cannot be real.

So I ask you this. If a runner is gifted with an exceptional VO2 max, or an extreme anaerobic threshold, will he or she always run faster than those without these gifts? My answer to this is no. Why? Because there is something that will always, always trump physical talent. And that, my friends, is motivation. And how does science explain that?

To you ultra runners out there. Think about this the next time your alarm rings before the sun rises.

When It's Time for the Ego to Shut Up 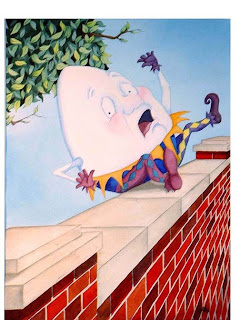 “When the truth knocks on your door, and you say “Go away, I’m looking for the truth.” And so it goes away.”

When the fireworks began to rain down from the damp summer sky, runners were nervously assembling on a dirt road. It was still dark outside and we were getting ready to begin a hot, 100 mile journey through the countryside.

I looked at my watch. The start was now only a few seconds away, and I just finished sharing my ultra-wisdom with my good friend and only crew member, Jim “Lobster” Milton. “The real starting line isn’t until mile 70” I remember saying to him. “I’m going to go easy until then, so I can really run when I arrive there. You watch, I’ll be fresh when everyone else is dying.” Lobster looked at me like I was some kind endurance yogi speaking a foreign language. He’d never heard of a 100 mile race, let alone crewed for one, until I called him a few weeks prior.

What followed was a spontaneous meltdown that would certainly have landed me in the ultra running hall of shame...if there were such a place.

Merriam Webster defines Meltdown as: a rapid or disastrous decline or collapse. A breakdown of self-control (as from fatigue or overstimulation). In ultra running, both definitions apply, but the second one usually precedes the first in the sequence that typically unfolds on trail.

The stage that was set is pretty simple. I spent months training for a single event. I traveled to a distant town to run the event. I huddled with several hundred other runners in a small space at the starting line. I listened to the countdown. I heard the sound of the starting gun. I shouted as I started to run. Adrenaline coursed through my veins.

As I ran through the first five, ten, fifteen miles, I checked my body for signals. But it wasn’t sending any. Or so I thought. What was actually happening was my body was working 20% harder than it should’ve been. I just wasn’t paying attention to it. But I kept hearing something. What was it? Oh yes, that was my ego. And yes, what I learned was my ego doesn’t listen to the truth. And when the truth knocks, my ego sends it away.

Then came the rapid and disastrous decline. Rapid because it came by mile 23. Disastrous because it appeared in the form of a sharp, stabbing feeling in my quadriceps. Kind of like the feeling of an ice pick entering and exiting the muscle in a nanosecond. What was that? Nervous thoughts bombarded me. Then I started seeing an image of Humpty Dumpty laying on the ground, his pieces scattered all about. And there was this very angry person yelling at him, trying to put him back together. But it wasn’t working. At that moment I realized my body was broken. And the angry voice was my ego.

Here is my take on this situation. My body is the only part of me that speaks the truth. Whether I choose to listen to it, really listen to it and act upon it, is a simple function of whether my ego can shut its mouth and sit in the corner. That is a tall order for anyone’s ego, especially mine. Just being aware helps. Because when the truth knocks, and I tell it to go away, I know that is my ego talking.