The sport of cycling continues to struggle with it's past, present and future ills in its battle with doping. Here's the latest debacle that has surfaced on the current Tour de France champion, Alberto Contador. 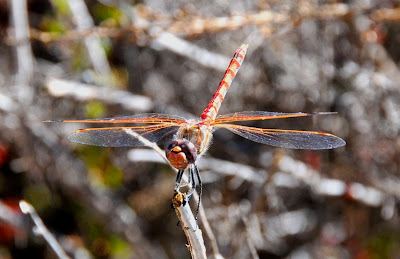 Ever see dragonflies on trail?  I do all the time.  I never knew they were so cool looking up close and personal.  This gal let me get pretty close to get some shots of her.  Did you know she eats mosquitoes?
at September 19, 2010 5 comments: 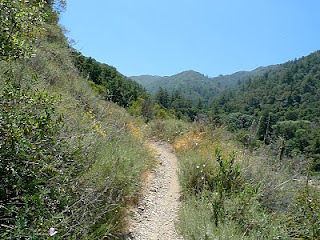 After a long, lazy summer I recently began picking up my mileage again.  There are times when I’m really focused and turn my attention to running, and there are times I drift away from that.  This summer I drifted.  And I enjoyed every minute of it!  It was refreshing just to be able to wake up in the morning on a weekend and not even think about running.  I need that every so often.
Last week I ran over 40 miles for the first time since Western States.  My fitness is actually pretty good, which I’m pleased with given the time off I’ve had.  On the other hand, I didn’t refrain from running entirely, and when I have run I’ve been able to focus more on quality.  Hills, stride outs and a few intervals a couple times a week have helped me hang on to a little fitness over the summer months.
But fall is here now, and I’m looking forward to trying some new things this season with my training.  I’ve started running on the track with Snails Pace, an Orange County running club that has been around forever.  I haven’t run on the track consistently for over 10 years and I’m anxious to see how it will impact my training and racing in ultra events.  One caution I’ve given myself is TAKE IT EASY OUT THERE!  The track is notorious for causing injuries and, as a victim of it, I’m very aware of this.
Another spin I’m trying is instead of just running long (and slow) on the weekends, I’m going to put more emphasis on quality by shortening up my long run but also push the pace a little.  Last week I ran with my WS pacer Rob M and we pushed a lot of hills and straights.  While I was out of my comfort zone for much of the run, I was pleased that I was able to recover during the run even after some of the more difficult sections.
So what is next?  I’m looking at a trail marathon this fall which will set me up well for next year’s ultra season, now only just around the corner.  As for which races to run, I’m still pondering that.  My gut tells me not to do Western States again, maybe try another 100 miler, but my heart isn’t quite sure.  In any event, I’m looking forward to running some fun races in 2011, and I’m as enticed as ever by the trail ahead!
at September 16, 2010 11 comments:

Don't Tread on Me!

Yesterday I was out for a medium distance run in El Moro state park.  As I was running along a single track section I turned a corner and whoa!  Boy was I close to treading on this girl!  At first I thought she was dead because she was completely still, but then I noticed her tongue slithering in and out of her mouth.   I quickly pulled out my camera and starting shooting in high speed burst mode to capture any movement.  I don't think she wanted to be on camera because as soon as started filming she began rattling rather loudly and quickly made her way to the bushes.

Here is what I saw.