It's the Journey, Stupid.

Just the other day I surprised myself. I was driving with my daughter who was home from college for Spring Break. We were off to play miniature golf, and enjoy some quality father-daughter time that is so hard to come by for us these days.

I looked at her and just started talking. The thoughts turned into words that started flowing outside of me. Like my sub conscience was talking for me. It was surreal, and I just found myself listening to what seemed like someone else’s conversation. Statements about how I didn’t think I could run ultra races anymore, that life was different now, and running like this just didn’t seem to mean anything to me anymore, at least like it used to.

There are thoughts. They come from the emptiest places, where self-doubt lingers, resolve begins to melt away, and personal commitment is at risk. They are not drawn to weakness, or insecurity, or indecision, but they uncover them.  They float in and out of our lives. They hide behind good days and expose the bad ones.

She nodded, and then we laughed, like people would do when they realized they’re talking about something really strange, or odd, and they were having a serious conversation about it anyway. Like someone not wanting to stick a needle in their eye anymore, so they are actually talking about not doing that to themselves anymore. Surely it's not this bad?

I realized that the apathy that owned these words was nourished by a race – a marathon actually – that I ran recently. That I went into this race with high hopes and left with a new dose of humility was, in retrospect, a bucket of cold water on whatever flame was burning. But one thing I’ve learned in ultra running, is not to build a fire on the results of a race or races, but rather on the journey that I take and the experiences I encounter all along the way.

Time to get back on the journey.

From the Cup of Reality 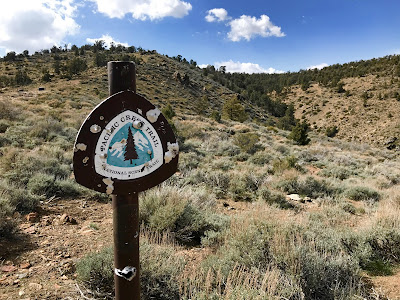 Call it strange. Tragic. Morose. But more than 200 bodies lie on top of Mt. Everest, perpetually at rest, entombed in an infinite frozen state. All in pursuit of “summiting” the highest mountain on earth.

The mountains draw. They are, as Thomas Wolfe once wrote “the cup of reality.” But why is this so? Why are so many of us drawn to them?

Of course there are endless words that describe their tidings, their extremes, their danger and beauty. From Muir to Mallory to Sir Edmond Hillary, all one has to do is open a book, or click a link, and the most eloquent, descriptive verse or prose will beckon you to higher altitudes.

After several weeks of running near the ocean, I felt the need to go high, closer to the clouds, into the metaphorical container of, as Wolfe put it, reality.

Not to take anything away from Wolfe, but there is a lesson I’ve learned, and too often forget, when I run in the mountains. It’s one of those things that often slaps me into submission, lest I forget while rollicking around the flatlands. This isn’t anything profound or spiritual.

It is that the mountains extract more from me. More of everything. I was reminded of this yesterday when embarking on a long run, again when I was a mere 6 miles in, and again when reached my turn around point after 3 hours of running. I would ultimately finish, depleted, in over six hours. 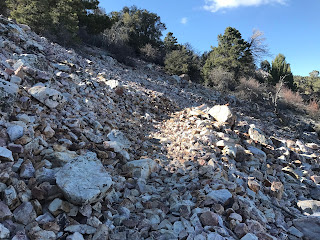 When crunching the numbers it starts to make sense. Between 7,000 and 8,000 feet, the space I ran between, there is 23% - 26% less effective oxygen than at sea level where I live. Unfortunately I’m not sure what was crunched more, my toes or my ego. This morning I woke with a pulsating blister under my toenail. Pain extraction - above average.

It was a new route for me. I found what looked to be a secret single-track trail that meandered strait up the mountain and into the trees, in the direction I wanted to go. Once on it, it became apparent that this was a very well used trail with some really steep sections, and amazing views of Sugarloaf Mountain and Mt. San Gorgonio. I climbed, and climbed some more, around 1,000 feet in the first two miles.

At the start, I promised myself I would eat after 90 minutes of running, and then every hour after that. By the time 90 minutes rolled around, I had been doing some calculations in my head about how much distance I had already covered. Big mistake. I intentionally avoided looking at my GPS constantly. When I realized I was several miles short of my “calculations,” all I could do was shout an expletive not needed here. I always spend more time running in the mountains, because I run slower. Time extraction – growing. 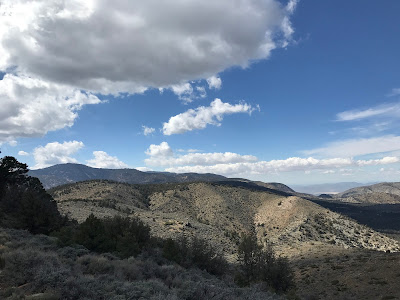 The next milestone was my turnaround point. It was only after I started this run when I began the debate in my head about exactly what I was going to do. It started with 20+ miles, then moved to 24, then 26 miles. All this seemed reasonable, so why not go for 30 miles? So I settled on 28, which meant a turnaround at 14. The turn around was a success, and then it dawned on me I wasn’t going to make it back to my car until close to 6 pm. With the temperature and my energy plummeting, I just tried to keep moving forward.

Surprisingly my legs didn't falter, even after a deceivingly punishing technical trail with some major rock fields to cross along the way. After a couple stops to drink in the views, snap a few picks, I found myself descending the secret trail I had ascended several hours earlier. There were moments - particularly on the banked turns - where I was starting to feel lighter on my feet than my age would have me believe. Life extraction - achieved.
at March 26, 2017 2 comments: 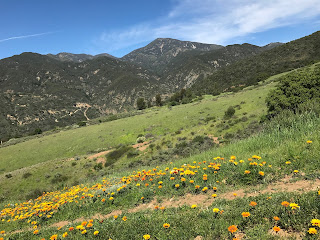 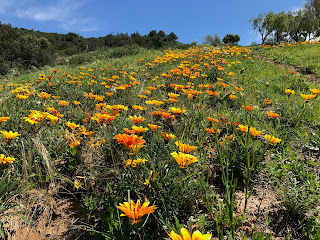 Got swept up by all the wildflowers

Come as You Are 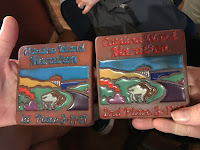 Someone recently asked me if I get excited when I’m about to go for a several mile run. My reply was kind of knee jerk, “sometimes, but sometimes not so much.”

There are good times, and not so good times being a runner. Sometimes these ups and downs swirl around in my head like an Irish stew with a little too much Guinness added for good measure. I’m not saying this because I’m drinking a Guinness right now -- about ready to poor a second (it’s St. Patty’s day people) -- or because I’m listening to Nirvana playing really loud. I’m saying it because it really sucks to run hard for several hours, reach a finish line, and then be disappointed. WTF? How can I do this to myself?

Come as you are. As you were. As I want you to be.