This weekend I celebrated with many of my fellow ultra runners at the So Cal Ultra Grand Prix Awards picnic. What a great event! A culmination of a long season and a kick in my ass to get back in the saddle for 2012.

Gary Hilliard, the grand master of ceremonies, put out an awesome feast replete with tacos, refried beans, cookies apple pie and an ultra cake with its very own trail on the frosting. Before the ceremony we did  little morning run...12 miles up some 3,500 feet to Mt. Wilson. Nothing like a little run up 3,500 feet to get the appetite going. Probably best I didn’t eat this stuff before the run...

It was good to see so many other runners I’ve shared the trail with this last year, and to meet many of them for the first time. Jack “attack” Cheng took home the Male Overall Mileage Award with 456 miles. Jack is an ultra machine and told me that he was already gearing up to run four hundred mile races to kick-off the new year. Yen Darcy took home the women’s Overall Mileage Award with 409.2 miles. I had a chance to chat with both Jack and Yen at the event. They are the real deal – true ultra runners with a commitment to their sport. They ran 19 races in 2011 between the two of them!
Diana Treister won the women’s overall title for the second year in a row. That is commitment. I won the men’s overall title. And to that, all I can say is YEAAAAA! I won’t deny it. It was a lot of work. But I enjoyed every mile. Well, maybe not every mile. There were some dark moments, sure, but I think they made the lighter moments shine a little brighter. Hanging out at the awards picnic with so many cool people that share a similar passion for running was a bright moment for me.
Congratulations to my friends Larry and Cherri Rich who both took home age group awards. They are the only father and mother ultra running duo that I know who run 100 milers together while raising three kids! And many, many thanks to the director of the grand prix Gary Hilliard and his crew Fred Pollard and Joe Magruder. These guys put in a lot of time to keep this southern California tradition alive and kicking.
at January 29, 2012 5 comments:


Its official. After stumbling upon the application deadline for Ultra Trail Mont Blanc (UTMB) just two weeks ago, I submitted my application with only hours to spare. What the hell, I thought, it’s a lottery and I probably wont get in anyway. Like a traveler passing through Vegas and looking to get rid of loose change, I dumped all my coins in the UTMB slot machine and pulled the handle. Oh, my. Jackpot!
What I didn’t do before I submitted my application to UTMB was learn about UTMB. There was no time. No time to read the race description. No time to learn about the elevation gain and loss. No time to understand the type of course it is. No time to run and hide like a little boy on his first day of school.
No big deal. Now I have seven months to read up on UTMB. Well, I’ve started reading. And reading. And reading. Now I think I’m reading a Steven King novel. Every page seems to unfold with a subtle nuance that leads to someone getting bludgeoned. No heroes, only victims - strewn across a landscape of misery and self doubt. I’m not sure if I’m going to wet my pants or the bed.
But like any good novel, you never know what is going to happen...
at January 20, 2012 8 comments:

Nine and a Half Ways To Keep Running Real 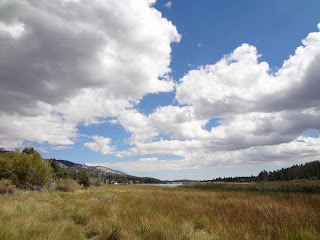 2. Cycle your training. Plan your peaks and valleys. From month to month, week to week, and day to day. There’s a time to push, and a time to pull back.

3. Don’t forget your posse. Run with them regularly. Swap stories. Talk about running. Talk about life. They keep you grounded. They remind you why you run.

5. Commit. To a goal. To an event. Any event. Preferably one that inspires you. If you can’t, rest easy. It’s not the end of the world. If you can, smile, and enjoy the ride.

6. Tune in. To music. To audio books. To talk radio. Whatever entices you while you run. Stream music (vs download) and listen to anything, anytime, and be surprised.

7. Tune out. Don’t think, just do. Let your mind drift while you run. Like a tumbleweed in a warm desert wind.

8. Wander. Leave home with no particular place to go. No routine. No plan. Just run.

9. Stop regularly on a run. Look around. You will be amazed at the little things that look back at you.

9.5. Always remember this: Running is not a job. It’s not a duty.  It’s not an obligation. It is your life, at that moment. Keep it real. Embrace it.

I Love This Sport

Running is difficult to describe. Ultra running is even harder. More so to non-runners. What usually comes from this conversation is a vague avoidance of what really matters to the ultra runner. The I-know-its-rediculous-what-I-do-but-I-do-it-anyway-and-don’t-bother-trying-to-understand-because-you-won’t-get-over-the-idea-that-people-actually-gain-a-really-deep-appreciation-for-making-it-100-miles-on-their-own-two-feet-through-mountain-passes-in-the-harshest-of-conditions-with-nothing-to-show-for-it-but-a-useless-belt-buckle-and-a-quiet-yet-forever-irreplaceable-feeling-of-accomplishment.

Ok, now that I've got THAT off my chest, let me move on to something more timely. I failed to get into the this year's Angeles Crest 100 miler. I waited too long to apply, and the race filled up. Just like that. I tried to plead my case to the race director. But he slapped me down before I could even begin to get my hopes up.
His reply:
“...i cannot take anymore runners
last year i filled in February
this year in December
so maybe a good idea (if u want to run the race) to enter little bit earlier”
My reply:
Can I get on the waiting list?
His reply:
“i dont keep a waiting list
just one more thing to deal with

thats it for 2012 race
if u entered coupla weeks earlier!!”
Ok, message delivered. I’m not one to brood over little mishaps, so I turned my attention to what other (100 mile) options might be out there. Several ideas popped into my head. One that has been lurking for a while is UTMB in France. I don't know much about it but the little I do know is that it is the ultimate race in Europe, if not the world. And guess what? The deadline for applications is today! My application? Sent.
But UTMB is a lottery, and chances are I won’t get in. Other options? Well, yes. Wasatch 100. Deadline for application is today. My application? Sent.
So here is my only concern, other than I’m still not in either race, UTMB has 31,000 feet of elevation gain. Wasatch 28,300 feet.
I guess the only thing left to do is wait with hope and fear.
I love this sport.