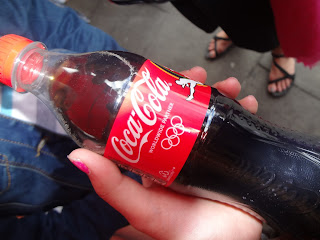 Every once in a while I stumble upon an article that really gets my goat. And the only way I can get it back is to write about it. So here I go…

Early this month the New York Times published an article about how Coca Cola is funding a newly formed non-profit research group that argues the lack of exercise, not diet, is the primary reason folks are overweight in the US. The so-called independent group is called Global Energy Balance Network, and its website is gebn.org.

On most days I would have just skimmed over the article on my way to the sports page. But on this day I was vacationing in Europe and the only sports to read about was European voetbal (soccer), which I disdain.

So I read on. And on. Until a light starting blinking in my brain. “Bullshit!” Bullshit!” The more I read the brighter the light became.

The leaders of the Coke funded group are influential scientist in their field and they are pushing a message in medical journals, conferences and social media. This is a quote by the chief proselytizer, Steven N. Blair, an exercise scientist, taken directly from the article:

“Most of the focus in the popular media and in the scientific press is, ‘Oh they’re eating too much, eating too much, eating too much’ — blaming fast food, blaming sugary drinks and so on….And there’s really virtually no compelling evidence that that, in fact, is the cause.”
We’ve all grown up with Coca Cola and a lot of us remain avid consumers of the brew, particularly us ultra runners looking for that extra boost late in a race. I’m a big user of the Coca Cola and Mountain Dew once I reach mile 70. The stuff is like rocket fuel, I can feel its power within minutes of it touching my lips, especially this late in a race.
It’s disappointing, however, to hear the company is operating with smoke and mirrors when it comes to obtaining “independent” research which seems to always downplay diet as part of the obesity problem. It turns out Coca Cola has not only provided funds to establish the Global Energy Balance Network, its also been funding GEBN scientist’s pet projects for many years – to the tune of more than $5 million. The ultimate laugh, as I see it anyway, is that the Network’s website GEBN.org is not only registered to Coca Cola, the administrator of the website is Coca Cola.
We can’t overlook the fact that Coca Cola is the largest producer of sugary drinks in the world, and the company’s primary purpose is to sell more product and generate profits to its shareholders. I’m the first to argue that there is nothing wrong with making a profit! But Coca Cola seems to have crossed the line from making a healthy profit to systematically promulgating misinformation to intentionally dupe the public in order to sell more of its product.
It’s not surprising that this is happening at this time. After all, as the evidence linking obesity to the consumption of sodas and fast food continues to mount, there is rising pressure on cities to tax sugary drinks and on schools to eliminate them from their menus. In the mean time Coke’s sales are slipping.
Regardless of your position on this issue, what is telling is Coca Cola’s response to the New York Times article. In an OP ED published by the Wall Street Journal on August 19 (10 days after the Times article was published) Coca Cola CEO, Muhter Kent, stated that:
“I am disappointed that some actions we have taken to fund scientific research and health and well-being programs have served only to create more confusion and mistrust. I know our company can do a better job engaging both the public-health and scientific communities—and we will.”
“…We want to get focused on real change, and we have a great opportunity ahead of us. We are determined to get this right.”

He goes on to describe in more detail the changes that are underway at Coca Cola, including their efforts to sell low sugar drinks, diet drinks and water. While I applaud Mr. Kent’s words, the beast still has to be fed. Like the tobacco companies that need to keep selling nicotine to smokers, unfortunately Coca Cola needs to keep selling sugary drinks to diabetics and the obese.

Which leads me back to point made I made earlier with more emphasis. Companies like Coca Cola ($9.3 billion profit in 2014) and cigarette maker Philipp Morris ($7.7 billion profit in 2014) do not exist to serve the public. They exist to serve their shareholders by making money. Full calorie Coke is the largest soft drink sold in the world accounting for 17% of the total market share. The sad fact is, regardless of public relations, it’s just not in the short term or long-term interest of Coca Cola to get people off of what might be killing them.

Of course there is also an argument to be made that it really isn’t the company’s responsibility to ensure people act responsibly. In other words, if people - children and adults - drink too much of the sugary stuff, they should be prepared to suffer the consequences. Everyone needs to take individual responsibility. I whole heartily agree with this, and it’s really the parents that need to be responsible for the kids.

But this isn’t a case of individual responsibility. It’s a case of corporate responsibility. When I read the article, one of the most poignant comments I saw came from professor Barry Popkin from University of North Carolina. He described Coke’s use of prominent researchers as reminiscent of tactics used by the tobacco industry, which enlisted experts to become “merchants of doubt” about the health hazards of smoking.

I think I’ll stick with my Mountain Dew at mile 70 (and beyond).

Post Script: I need your help! As you can see, I don’t write this blog for money…hence no annoying pop up advertising. However I do write to encourage and inspire others. My only way to know I am succeeding is getting feedback from and building a following of readers. If you have found value in this blog post, please leave a comment below and follow my blog via email (enter your email at top of blog) or by Twitter here.

Thanks for your support. It keeps me motivated!!

This reminds me about the presidential candidates debate where "The donald" let the cat out of the bag on how all the big corporate entities, particularly Wall Street, own the politicians...

Really Will the current state is pretty pathetic when you think it through and completely rigged by the mantra of maximizing shareholder profit at all cost...something that began in the 80's...germane to your blog post on Coke and health etc. entire economies the size of a "not so small/poor developing country" depend on maintaining people in a state of health that is sub-optimal; health insurers, big pharma, the entire health care model as it exists today, government funding , research funding etc. ....so Coca Cola is a cog in a much larger wheel, albeit a large cog. More to come but I don't want to say too much in a public forum at this point.

Spot on Will. Nice write-up

Thanks Peter and Pace. Nice to hear from you guys.

Everything seems like such blurred lines anymore. Thanks for seeing through the fog and pointing out the inconsistencies. I haven't tuned in for a while but still find your writing and position motivating, informative and solid.

Very reminiscent of the tobacco companies. But, as you say, these companies have no compelling interest in telling us the truth. Just telling us what will make us buy more of their products.

As far as exercise versus diet, a quick glance at the bottle of coke tells the story. 240 calories for a 20oz bottle. You can drink one in 1 minute but it takes a 150lb male approximately 20 minutes to burn off those calories. I think diet has the bigger impact on weight than exercise, despite what Coke says.

Thanks for your posts.

WOW, the poisening of the duliosion americans.