Berlin - Above and Below


We pulled into the beer garden with more than just a few miles in our legs. If it weren’t for the guided tour, I would’ve easily spent the rest of the day in this place of refuge, guzzling Berlin Pilsner and slugging down sausage and snitzel. But this was a serious bike tour and it happened, for us anyway, on one of the hottest days of the year.


Life events have passed massively through this narrow space. Roaming the streets of Berlin is like plunging into an abyss of the human condition, where the boundaries of shame and honor surround you wherever you might find yourself. If you are daring to look, the darkest of dark deeds of man are on searing display here, as are his finest moments of triumph and honor.

We stood in the building where Karl Marx penned the Communist Manifesto. As I listened to the narrative, it occurred to me that had he not written this political philosophy, it just might be that the Soviet Union would have never been formed and the Berlin Wall would have never been built. Call me a nut, but stranger things have not happened! Then we rode across the plaza where 20,000 books were burned by the Nazi’s.


If history had a gateway to heaven and hell, it might have passed through Berlin. During WWII the Allies dumped 65,000 tons of bombs on the city. When the war was over, and the infrastructure and architecture was virtually destroyed, the city was divided into four sections and controlled by foreign powers. Then, on one morning in the summer of 1961, east Berliners woke up to a startling revelation: a wall was built around their portion of the city to prevent them from leaving.

But it is underneath this reborn city where the German people have confronted the truth. Where the past, the difficult and gruesome past, is on full display for all to see, if you dare to peek. Here, under the Holocaust memorial, sits the Holocaust Information Center. People don’t talk here, because there are no words that can describe.


It is here where I read this, as written by a 12 year old girl, held in a concentration camp, to her father on July 31, 1942: “Dear father! I am saying goodbye to you before I die. We would so love to live, but they wont let us and we will die. I am so scared of this death…Goodbye forever. I kiss you tenderly. Yours J. 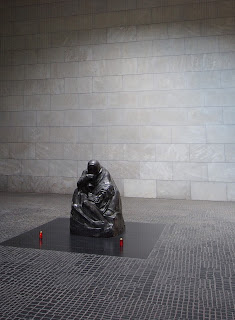 We rode across the boulevard while gazing upon the Brandenberg Gate where, decades ago, JFK drove by during his visit to proclaim his enduring support for citizens of Berlin. It was this visit when America’s 35th president stated that “all free men, wherever they may live, are citizens of Berlin.” And it was here where he uttered the now famous German words “Ich bin ein Berliner!” which, I’m now informed by my 16 year-old daughter, was interpreted by some Berliners as “I am a jelly donut.”


Post Script: I need your help! As you can see, I don’t write this blog for money…hence no annoying pop up advertising. However I do write to encourage and inspire others. My only way to know I am succeeding is getting feedback from and building a following of readers. If you have found value in this blog post, please leave a comment below and follow my blog via email here or by Twitter here.

Thanks for your support. It keeps me motivated)!!