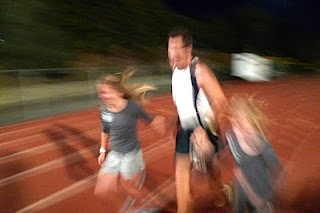 I came to this year’s Western States with three goals in mind. First, simply get to the finish line regardless of time.  Not too exciting for some but the way I see it anything can happen during 100 miles and nothing can be taken for granted out there.  I also knew my two daughters would be waiting for me at the finish and seeing them was number one for me.  Second, beat last year’s time.  Again, not a huge thing but it was something I was thinking going in.  Third, run under 22 hours. 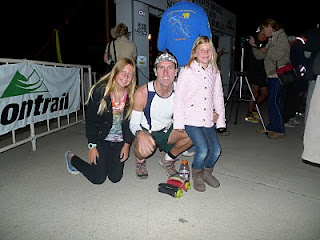 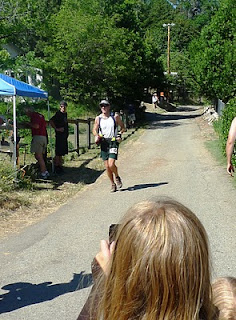 My third goal was my stretch goal and I chose it a couple of weeks ago after starting my taper.  I felt my conditioning was very good, my training had gone well and I had no injuries.  This would have been 90 minutes faster than my time last year.  I knew all the key aid station splits I needed to hit to achieve this time, and I hit every one—Duncan Canyon (23.8 miles in 4 hours), Robinson Flat (29.7 miles in 5:20), Michigan Bluff (55.7 miles in 11:23) and Forest Hill (62 miles in 12:56).  There was only one problem.  By the time I hit Michigan Bluff, my legs (quads again, surprise!) were toast and I was reduced yet again to a gimp-like shuffle for much of the last 25 miles. 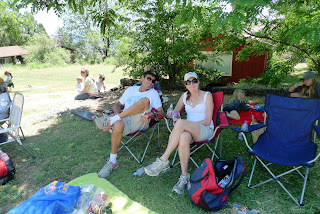 As the race continued through the night, and my goal of running under 22 hours was slipping away, the situation started to take toll on my mind.  How can my goal slip so quickly from my grasp?  Why did my quads fail me yet again?  What didn’t I do right in my training?  It was then I realized I was running over my head.  Maybe I should’ve set the bar lower.  Despite my perils, my crew and pacer were outstanding.  Rob (pacer), Jeff, Dawn, my wife Jen and two daughters were all there to get me through some rough spots with words of encouragement, nutrition and supplies.

Another one of my goals this year was to get to the River Crossing (mile 78) during day light.  When my pacer Rob and I left the Cal 3 aid station around 8:30 pm, I remember asking one of the aid station crew how far it was to the River.  When someone said four miles I thought we had a fighting chance to make it by twilight.  But when we were still running after 5 miles (not 4 miles!) and darkness had set in I started to lose it.  I let a few f-bombs fly.
The night wore on and eventually Rob and I forgot how to read a watch.  The race started at 5 am but for some reason we both assumed I had to finish by 4 am to go under 24 hours, let alone beat my time of 23:28 last year.  Not only was my stretch goal out of reach but my second goal (mistakenly) was now in question.  Another mental torpedo.  It’s weird what a full moon and no sleep can do to your mind.  Not realizing we were adding an hour to my actual time, we rolled into Highway 49 (mile 93) around 2:15 am.
Since I thought I only had 1 hour and 45 minutes left, I pulled up a chair, sat down and said to Rob, Jeff and Dawn I didn’t give a damn what time I came in anymore.  I’d decided I’d had it, and that I wasn’t going make it under 24 hours. I invited everyone to sit and bullshit with me for a while...kind of a mini pity party.  It was then Jeff looked at me with a puzzled face and said I actually still had 2 hours and 45 minutes to finish under 24. Rob and I and looked at each other realizing what we had done wrong and just got up and kept moving.  From then on my focus went from just getting to the finish line to beating my time from last year. 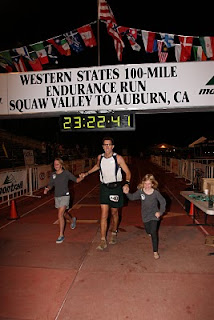 But enough of that already.  I finished under last years time, and I’m proud of that.  But what I’m most proud of is what happened at the finish line.  As I entered the stadium and rounded the last turn on the track at Placer high school, there stood my two daughters, ages six and eleven, waiting to take my hand and run with me through the finish line.  This was the moment I was waiting for.  The moment I kept visualizing in my mind through the race.  The moment that kept me pushing forward, despite the ups and downs.  As I approached my girls I could see them, smiling, knowing they were about to be part of something pretty cool.  When I reached them I asked them to take my hand, and just like that the three of us ran those final, precious, steps together through the finish line. 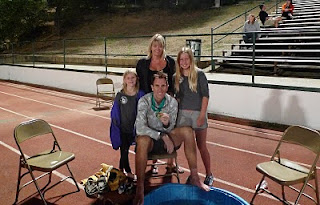 Wow, Willie AMAZING. What an enormous undertaking. Loved your recap. Hard to believe the human body is capable of that. Hats off to you. Congratulations!
-Carole

I am tearing up with your last paragraph. What a journey. I hope some day to cross through those gates and have my daughter run with me! Congratulations. What a day!

How you finished the race left me in tears...sounds like the perfect end to a good race. Congrats on sub-24 and breaking your previous time.

Congrats and I enjoyed your report. I'm looking forward to getting my name drawn from the bucket soon, hopefully. And what a memory you gave your girls to last them a lifetime.

Great job Will, Way to stay strong. I too have dropped many f-bombs in many races and I have had the fortune to finish a race with my children so I know exactly how you feel:) Peace E

Amazing WS race report, your a role model for aspiring ulra-runners and your daughters :-D

Thanks for sharing this post! I am running my first 12 hour race this Sunday and I am looking forward to my son running the last mile with me. This was just what I needed to read...

Congrats on a super job. What happens to our brains on long runs and races? Too funny! Sorry to hear that the quads were still not indestructible. Sounds like they held up well enough though. But the best part is you could share the experience with your girls. How inspirational you must be to them!

Congratulations, Willie, on your ULTRA accomplishment. Your story exemplifies the power of self-talk. Thanks for sharing.

My eyes just welled with tears when reading about you meeting your girls at the finish line. Beautiful... I too have two daughters and I'm running my first 50 miler in November.
You don't know me, but Laura Weaver is my cousin and I noticed she commented on your blog on FB. So, I decided to read it and I'm glad I did.
Congratulations!
Rose Colleran

Carole, thanks for that and we look forward to seeing you guys this weekend;

Trialmomma, indeed, never pass up the opportunity to get your daughter to run with you. She'll remember that forever;

Rachel, yes, it was the most perfect end that I could have asked for;

Thomas, good luck with the lottery and don't give up, western states is worth the wait!

EricG, we need to share a few miles together on the trails in NY. Look forward to doing that soon;

Sveta, thank you, and it is nice to know some of what I do can have a positive influence on others. It means a lot to me;

Moore on Running, good luck this weekend and savor, and I mean really savor, those steps with your son. It doesn't get any better than that!

Cynthia, your words are full of wisdom. My weight training regime was indeed not enough and I need to spend more miles on those down hill trials if I ever want to master WS. Not giving up!

April, self talk indeed but I could've been a little more positive out there. Sometimes things don't go as planned but I'm still learning the boundary of my body and mind;

Rose, I saw Laura last night, and thanks for your kind words. Good luck on your 50 miler and don't forget to enjoy the journey.

Jakuku, you are probably my most loyal reader an referrer. Thanks for your comments and for linking to my blog! Keep up the good blogging!

Wow! That run was inspirational! Your children must have been so proud. Staying motivated is such an essential part of running.

Congrats on WS100! You truly have accomplished a feat few will ever attempt, let alone finish. Then to have your daughters cross the finish with you, a perfect finale. Could I suggest a future post? What is it like to run 24 hours without sleep? What challenges does running at night present? When/where does mental and physical exhaustion play a role? Thanks Will! Congrats again!

Computer issues. My comment posted twice, could you delete one? Sorry.