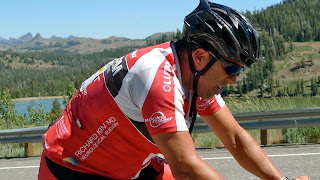 Last year, when my brother told me that he was training for the Death Ride 2013, a 130 mile road ride that ascends 15,000 feet through the Sierra Nevada Mountains, I didn’t know what to say. All I could muster was “really?” All I knew was this was a really a lofty goal, even for the fittest of cyclists. It would require months of training for four and five hours or more at a time on the bike, week after week.

Despite having a lot of experience on the bike, my brother wasn’t in what I considered, well, top form. His training consisted of a ride or two per week at best, and often not on a bike but on a standup paddleboard. The pounds he had put on over the years were not going to help. I told him it would be possible if he lost weight and trained properly for it. What I didn’t tell him was that he had never done anything like this before and his chances of pulling this off were slim at best.

Weeks passed. Then months. He seemed enthusiastic about his training, more so than I had seen in many years. But the work had only just begun if he was going to successfully tame this dragon. Then I received a call from him one weekend. I was on a trail run. He told me he’d just finished a training ride on the Angeles Crest Highway. He said he rode over 100 miles in the heat and wind and gained thousands of feet of elevation. And he had done it solo.

I noticed something about his voice on this call. It wasn’t the voice of an exhausted cyclist who had just finished a major training ride, someone struggling to get back in shape. It was more like a voice of a child who had just returned from summer camp. He described the ride in vivid detail -  catching other riders that appeared like silhouettes in the distance, feeling the searing heat from the black pavement, passing beneath the trees of the San Gabriel Mountains.

It occurred to me that, like a child, he had found his pleasure again. Under the big blue sky, riding his bicycle as nature greeted him. But unlike a child, he rode to regain his health. His peace of mind. 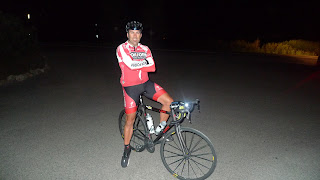 It was 4 a.m. when the alarm went off. Three of us were shacked up in a tiny, one bed cabin. My dad, who decided to join me on the trip to crew my brother during the Death Ride, insisted on sleeping on the floor. “I could hear mice scampering around the place all night,” he grumbled when we woke. My brother and I just laughed and shook our heads. Without his hearing aids, he could hardly hear us yelling at him. 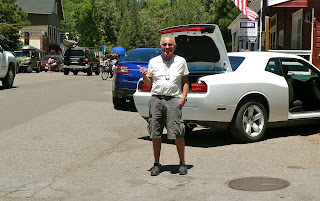 Just before 5 am, my brother mounted his bike, flipped on his light, and was off. It was still dark and cold at 39 degrees, but the riders didn’t hesitate. What followed was a long day on the bike for him, and a lot of hours under the hot sun for my dad and I. I’ve never crewed for a cycling event and I found it to be a lot of fun. I’m sure my brother’s strong effort was a big part of this. 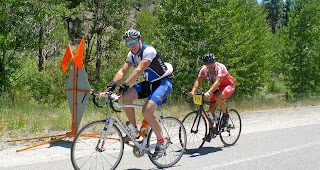 He rode conservatively for most of the day using what he had learned from his long training rides and his heart rate monitor and finished ahead of most of the other 3,500 riders. When it was over, he simply got off his bike, and I looked at him and my dad. I could see a connection I hadn’t seen in while. Then the three of us walked around the exhibitor area, ate some homemade berry pie, and talked about the event.

Some people ask, why ride 130 miles? Or run 100 miles? Better yet, why do two brothers do these things? If it is true that the apple doesn’t fall far from the tree, then we can only thank our dad for this blessing, or curse, depending on your perspective. He ran every single day when my brother and I were growing up, and he still works out with a trainer. 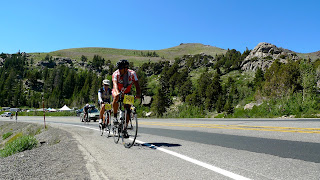 Other people shake there heads at these fitness endeavors. And I shake my head at them. We now live in a society that is experiencing an epidemic of disease and disability directly related to modern lifestyle. It is said that our kids may be the first who will live shorter lives than their parents.

To the doubters out there, try to understand that it all starts with the fact that getting on a bike or going for a run are natural states of being that we all need. Without these or other forms of exercise, our bodies and minds will, eventually, simply wither away. A sacrifice to modern society’s vicious cycle. It finishes with the fact that as parents we are, more than anything else, role models to our children.

But, above all else, when a parent sees a child return from a ride or a run, the natural cycle is complete, and the parent is fulfilled.

Congratulations Al. You rode an amazing ride. We are all proud of you! 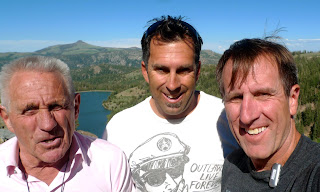 what a great family adventure. congratulations to all of you

Great to meet Alfred and a great achievement. Reading this together with the other posts got me thinking in the Canyon.....so did the rim to rim to rim....north kaibab and bright angel both times. Tough day though....105 degrees at the ranch.
Its amazing what the body can do given the right mental approach....
Neil, Scotland

Thanks Neil...good to meet you at the ride. Sounds like your R2R2R went well. thanks for the comment!

Death Ride wouldn't be possible without the support and training from big bro.

I knew Alfred was desperate to get his VESPA but had no idea he was training for The Death Ride! Congrats!

Also noted how he felt on his AC Hwy ride...sounds like the quintessential VESPA Experience!

Had a smile on my face reading the part about the 100 mile solo cycle and being like a child who found his pleasure again.