It has been written that finding the perfect running shoe is a lot like finding a perfect partner. It can take years, even a lifetime. Some would say the perfect “one” doesn’t exist. Others say you have to go through a lot of them to get to the right one.

Onlineshoes.com recently contacted me to do a review of a particular running shoe. I was reluctant, at first, since I haven’t “strayed” from my Hoka One One’s in a while. Mainly I just don’t do a lot of reviews when asked by product sponsors or distributors. I’ve always felt there is a bit of a conflict of interest when a company gives away its product in exchange for a review.

But I decided to do this one anyway. Why? First, I’ve used onlineshoes.com in the past and found their service to be very good. Second, they asked me to review a pair of Asics GT 1000s. Cool, I thought. I’ve run more miles in Asics than any other shoe made. 10ks, half marathons, marathons, 50 mile and 100 mile races. I’ve run them all in Asics. But I haven’t run in Asics for a couple years, so I thought it would be interesting to see how they compare to my latest quiver of shoes. 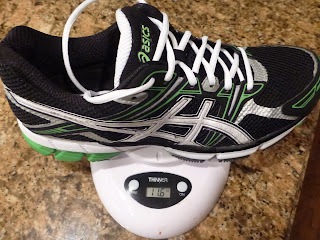 My second test was to bend the GT 1000 from heel to toe. Whenever I walk into a running store and look at a shoe the first thing I do is fold the shoe like a taco. The purpose is to see where the shoe bends. If it bends near the ball of the foot, like the GT 1000 does, it passes my test. If it bends in the middle of the shoe, at mid foot, it fails my test

The reason? If a shoe bends near the ball of the foot then it will bend naturally through the running gait from foot strike through toe-off. If the shoe bends in the middle it will put much more stress on the planter fascia, the last thing a runner wants. I have run in shoes that bend at the midfoot and the result is searing pain in my planter fascia within a few miles. I've returned dozens of shoes over the years for this reason. Once I started doing this taco test I stopped returning so many shoes.

While running in the GT 1000 I discovered the shoes are a relatively stable, firm ride on the road. Not too much cushion, but with gel in the heel and forefoot, enough to give you the protection you need. I like what Asics calls their Trusstic System which is a plastic midfoot unit built into the shoe to increase torsional rigidity. It is this system that prevents the bend in the midfoot.

I have pretty high arch and over the years I have found Asics tend to fit my foot well. The GT 1000 in no exception. The overall fit of the shoe is snug, particularly in the heel and midsole. The forefoot is also snug, but I would prefer a bit more room in this section of the shoe. 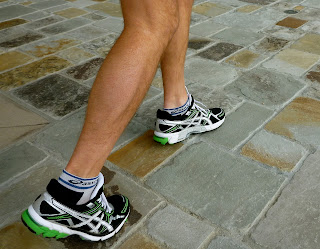 Since I started running in Asics some 25 years ago the company has used a DuoMax Support System which is a dual-density material in the midsole that is designed to reduce over pronation. I don’t pronate but I have found this system to enhance shoe durability. DuoMax is basically a harder material that is used on inner half the midsole.

ASICS stands for “Anima Sana in Corpore Sano,” Latin for a sound mind in a sound body. Whether you are a serious runner gunning for a local, state or national title, or a novice simply seeking to get in shape, ASICS has the goods for you. The GT 1000 is a solid road trainer for those of you with the commitment and resolve to meet your running goals.


Post Script: I need your help! As you can see, I don’t write this blog for money…hence no annoying pop up advertising. However I do write to encourage and inspire others. My only way to know I am succeeding is getting feedback from and building a following of readers. If you have found value in this blog post, please leave a comment below and follow my blog by entering your email at top of page or on Twitter by clicking here.

Nice legs Wilma ! I wear New Balance but would gladly convert if your newest sponsor would consider some "GRATIS"swag !!! Gotta go tork all my running shoes now.

Your Taco Test rocks. Before I got PF I ran a lot in Brooks Green Silence. I just tested it, and it bends in the middle. Wish I had known this a couple years ago.

Now I'm a PF-less Hoka guy, but for some reason my Mafates don't get used as often as my BondiBs or Stinson Evos. Mafates seem to be way too stiff, as they don't bend at all. My other Hokas bend easily in the forefoot. Interesting. Thanks.

the actual latin manner of speaking is "mens sana in corpore sano", that means exactly what you said, while anima means soul

Enjoyed reading your review. Asics are always a popular choice, and do the job (running comfortably!) very well, especially these ones!

I just brought gt 1000 for women, they are affordable and I fell in love with the shoe while putting it on. When I finally tied the laces, ''THIS IT'' I said to my mom. She did not believe me since this is the first time am buying track shoes. I love this review, enough said. You are an EXPERT.

Just picked up the women's GT-1000 and love them!! I'm not an avid runner and only log about 5 miles a week but when I do run my feet feel great in these.

I will have to try these out. I have very bad PF (have custom orthotics that don't work and cost a bundle). I normally wear New Balance, mainly because they are Made In USA. But I have had to give up running because of the pain and have started using an elliptical machine. Maybe these will do the trick after all these shoes are much cheaper than another pair of custom made orthotics.

Great review. this shoe has an excellent balance of support and cushion. not too heavy nor is it too light, I really like it

you have done massive work when collecting this!! i loove your collection so much and love your blog as well<333 thank you for this ans keep going:) you're amazing:))<33
ladies running shoes

This is an old version of this shoe, but still is a good one

I bought a pair of these about two years ago and loved it! It starts to show early signs of wear so I am now trying to find a good replacement for it.

Same here, love the show when trying it on. I said this is it. These are my second pair in a few years I've tried others but have returned. Only problem is the shoe probably needs to be replace twice a year. It doesn't seem to last - kind of breaks down after a few months or regular use.

Awesome stuff keeo it up! Thanks for the review! An buying a pair for my dad! So really appreciate this!

I have quite high curve and throughout the years I have discovered Asics tend to fit my foot well. The GT 1000 in no special case. The general attack of the shoe is cozy, especially in the heel and padded sole. The forefoot is additionally cozy, however I would lean toward more space in this segment of the shoe.