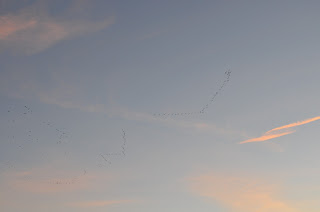 The last few weeks has brought millions of visitors to Southern California. Not the normal Disney/beach seeking human form, rather the feather/flocking migratory form.

Just last week I was out on a hike with my daughter in the upper newport bay. Overhead came drove and drove of these v-shaped flying formations. There must have been 10,000 in these flocks that flew over our head in less than 5 minutes. And they kept coming! As I watched I could only wonder, where are they all going? Do they sleep? I just new they were headed toward the ocean.

Two days later is was out for a rare run on the beach. It was about the same time of day, just before the sunset. Then over the sand they came. Thousands. Swooping down from their v-formations several hundred feet over head to just inches above the surf. They continued flying, so close to the water they disappeared into the choppy sea.

It's good to be in the presence of nature.