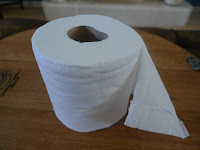 Today I had a near disaster experience.  I was so close to disaster that my heart rate is still jacked up about it.  I can only thank the running gods, maybe mother nature herself, for sparing me.
It all happened on a trail during a 15 mile run.  I was moving well up the single track trail in Coyote Canyon, a few steps ahead of my brother who was on his mountain bike.  Just as I stopped to take in the view across Newport Coast Road, I received a call from my GI track.  This was not a routine call.  This was an emergency call.  I quickly grabbed some Charmin from my brothers Camelback and charged for the nearest bush.
As I was crouched down tending to my business, my brother made a wise crack about a rattlesnake biting me in the ass.  “Ha ha bro, I know what I’m doing out here, don’t try to scare me with your jokes”, I thought to myself.  But his words must have hit home, because just as quickly as the thought of a rattlesnake was moving through my sub conscience, my eyes were surveying the ground around me.  All was well until turned to my right…
Holy crap, there’s a bee hive two feet from my bare ass!  “Get the hell out of here!”, I remember yelling to my brother. I felt like a ballerina who had just soiled her tutu as I tip toed away while pulling up my shorts.   Thank god I had finished with the Charmin.
Today I came very close to disaster.  If I had been a mere two feet to my right when I squatted, well, I don’t think I’d be here—sitting—to tell you the story.
at July 31, 2010

That actually happened to me while running a 100 mile race up here in Alaska. At mile 35 nature called and of course I squatted and went right on a wasps nest. Boy were they pissed!! Anyways I started screaming when the stingers hit the skin and my friend Dave ran back because he thought I was being mauled by a brown bear. He still makes fun of me about that tragic event to this day.

Glad you were spared, but that's funny as hell!

Yikes!!! That would not have been so funny...glad you avoided serious pain!

Glad you missed the bees' ire, and that it wasn't a rattlesnake!

Funny Will! By the way, cool photo in latest edition of Ultra Running Mag. Page 22 if you have not seen it. Your famous:) Peace EricG

thanks all. I'm not one to share my more intimate moments on trail, but sometimes you just have to! Hope to see you all out on trail soon!

That is hilarious. It's one thing to have the emergency evacuation, but the bees, too.