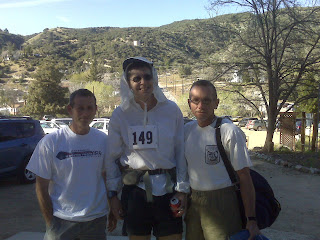 Jay Grobeson, Scott Sullivan, and Bill Ramsey (each with ten Angeles Crest Finishes) after the Race

Bill Ramsey and I drove to the start around 5 a.m. under a dark, star filled sky. Another reminder of the blistering sun we were about to face in the hours to come. Leona starts at 6 a.m. sharp. To the dismay of runners like me with a GI tract that doesn't wake up until 7 am, this can wreak some serious potty havoc on race day strategy. Unlike last year's debacle, I succeeded in jump starting my system before the start with two cups of coffee made from fresh ground beans Bill and I purchased from Palmdale's own Albertsons the night before. A major coup-de-latrine in my book. 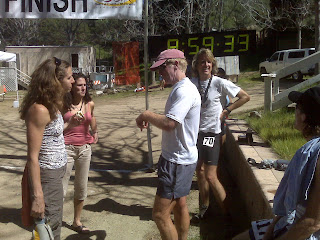 The start of Leona Divide is deceptively steep. It climbs 800 feet in just over 2.5 miles along winding dirt roads. Within the first few minutes my heart rate was pushing 165 bpm, not a good sign with 49 miles left to run. With an eye toward finishing, I pulled the pace back a couple of notches and got into a rhythm. Robert Blair, a fellow Sycamore Canyon 50k finisher, scampered along with me as we rounded through the meandering trail (thanks for reading the blog Robert!). The sun soon emerged and we found no solace from the disappearing shade.

This year's coarse was altered from the standard LD 50 course, with the addition of several miles of dirt road in lieu of single track trail. Not a preferred exchange, but a necessary one due to issues with the many power lines in the area. I will say that this year's course, in my humble opinion, seemed more difficult, mainly due to the long hill added with the out and back. We didn't hit single track trail until mile 25, and when we did it was a welcome site. By this time I had already succumbed to the relentless Tracy Moore, who ran by, then ahead of me so methodically that I was rendered a mere spectator until he simply dropped me on one forgetful trail. 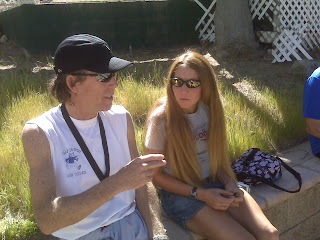 As I was making the long four mile descent down the Pacific Crest Trail after mile 25, I came upon Michelle Barton. We ran along together until we hit the 1,500' climb out of aid station 5, when I watched Michelle pull away from me as she floated up the hill. Knowing that this would be the longest of the climbs on the course, that the sun was beaming in full force, and we had yet another four mile climb to come at mile 42, I hunkered down. I kept moving forward under the sweltering sun as one must do along these long, relentless hauls. Images of Tracy and Michelle still appeared, then disappeared, through the trees before me. 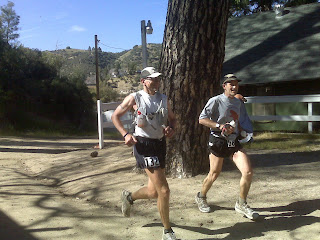 Aid station number 7 is a turnaround at mile 35.5 in the race. By this time, if you still care, you can assess where your fellow runners are along the course. Many words of encouragement and high fives can be offered up along this section of the course. Most importantly, after the turn, it's all downhill until mile 42. Scott Mills was on my heels as I pulled out of the aid station, and not far behind him was Greg Hardesty. 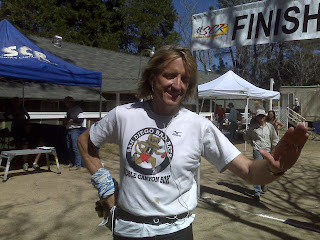 After a Great Run, Greg Hardesty Lifts His Hand for a High Five


As I came to the end of the long descent, I caught Michelle again, only to see her dance away from me once again on the last climb. Finally, after a long, brutal, hot, and thrilling run, I rounded the final turn. Before me was a finish line, a clock, many cheering spectators, and a moment to take a long, deep breath of relief. All in all, a very good day - race time 8:15, 10th place overall, 2nd age group (40-49). Average heart rate 153.
at April 19, 2009

CONGRATS on your 2nd place AG finish, amazing! I don't know how you do it. I struggled yesterday with 20 miles... I'm in complete awe of you ultra runners! Well done, enjoy your rest! :)

Saltwater 5000 Rockstar Will,
I loved running back and forth with you at Leona!! That race was such a blast!! A top 10 finish is awesome!!! You are going to rock States!!

Oooh, I found your blog Will! Nice run on Saturday. :) Chris and I just wrote up a report of sorts on my recently resurrected blog. Heehee! Happy trails.

Congratulations on bettering your PR at Leona by 23 minutes on a hotter day and a possibly tougher course. Top 10. Incredible!

And it is I who want to thank you, for your blog. You, and others, who willingly share their experience on such blogs and thus really help out other runners who are trying to learn just how to best run an ultra, and have fun doing it at the same time.

Congrats to several others:

Michelle Barton for bettering her time from last year by 10 minutes.

The runner who finished 5th (sorry, forgot the name) in 7:45, who just started running last year and bettered his 2008 Leona time by TWO HOURS! Wow!

Were you for real? Or just an apparition I experienced as a result of that central fatigue I think I had three quarters of the way through the race? I'll have to check the official Leona 2009 results once they are on the Leona website.

To Lora Liu, fellow Malibu 50K runner, who was kind enough to run with me for about a mile around mile 19 or 20, before flying on by and finishing first in her age group with a terrific 8:34.

Elizabeth Boyd, my fellow Malibu and Sycamore Canyon trailrunner friend of the "walk the uphills" wise advice, who passed me like I was standing still at mile 32 and turned in a 9:12 in what I believe was her first 50 mile trail run.

Scott Mills, who ran with me from about mile 10 through mile 18, and who was extemely helpful to this new ultra runner, sharing some of his hard earned running wisdom along the way.

And accurately predicting I could expect to run about a 10 hour time in my first 50 miler. He was off in that prediction by only about a minute and a half.

To several other wonderful folks, who I shared time with on the trail, not to forget the person at about mile 41 who offered me an ibuprofen tablet.

That little tablet helped return me to running 10-12 minute miles for the last nine, after about 15 agonizing miles in which my quads were shot, when I didn't think to take a pill to help ease the pain, and I was dreaming that I'd be lucky to finish this race in under 13 hours the way I was moving up and down the trail after around mile 25.

I didn't know people took ibuprofen during these things!

Though the day was warm, it could have been a lot worse. I think it was 75 on Saturday. Today, it was 88 at Lake Hughes.

Yikes! No thanks this early in the season in my first 50 miler!!!!

Before Saturday I had never run farther than 32 miles. So, I was very happy with a sub 10 hour finish, (thanks to Scott Mills, and the mysterious ibuprofen lady at mile 41!).

Maybe next year I will have a chance to crack nine hours on the course, weather permitting.

The runners, Leona Divide organizers, and aid station volunteers were all awesome.

Thanks again for everything.

Good luck the rest of the year in all the things that you want to accomplish.

way to Will. sounds like one to put on the books to do....K2

I wish I could have been there with you guys - I see so many familiar faces and names on here that it really makes me homesick. I have run Leona for the last four offerings but couldn't justify to myself the cost of making the trip out from GA this year and chose to run the Ouachita Trail 50 in Maumelle AR. It was a beautiful race but it was nothing like seeing the faces of those I've spent so much time with on the trail before - it made me realized that - it ain't all about the trail - it's a lot about the people on it.

Thanks for the article on Traumeel, in another section of your blog, Will.

Even though an ibuprofen tab helped me out a lot in the last 9 miles of Leona this year, your post on Traumeel offered a lot of reasons why trying it may be a better option than popping that Motrin.

I'll try it and see how it works.

Thanks folks for your kind and expressive words. Michelle, good to run with you, I will be turning my attention to hill training so look out! Sue, good to see you out there at Leona and I hope to see you at some upcoming events, when you guys are in OC again let me know, we can chase some rabbits. Robert, thanks for introducing yourself at the start, it was great to meet you and see others actually read what I write (thanks for your recap of the race here...Scott Mills is an animal). Robert, I look forward to seeing you again out on trail. Keep on running folks!