An Interview with The Man Who Ran Around the World 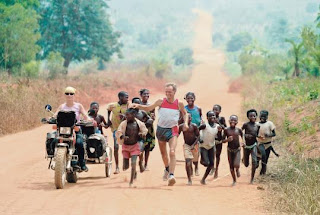 I conducted the following interview with Serge Roetheli over the phone on April 22, 2009.

Will: Today I’m talking with Serge Roetheli, a man who together with his wife, Nicole, who served as his crew and support, set off from their home in Switzerland in Feb. 2000 and over the next five years proceeded to log more than 25,000 miles, through 37 countries and across six continents. In other words, Serge ran around the world. This is an incredible story about a man and his wife who together overcame challenges that most people would never experience. Serge and his wife sold all their possessions to accomplish this journey.

What was your inspiration to run around the world?

Serge: We left our home in Switzerland to run around the world for three reasons. The first was to be free, the second was to have a fantastic adventure with my wife, and third, was to help some kids. Our goal was to bring awareness of suffering children around the world.

Will: Do you feel you have accomplished those things?

Serge: I do, of course! We said we wanted to do it and we did. We were very confident that we would succeed, and we did! It was the best life to live, not the easiest. But it was the price we paid to live our dream. In the end we raised more than $300,000 for different children’s charities. Our main charity was International Vision Quest.

Will: How did you prepare for this endeavor physically? Did you do any special training?

Serge: There isn’t any special training to prepare you to run around the world. All my life I was preparing for this world run. When I was 16 years old, I started to be a boxer. I was a six-time Swiss Champion, and did the Olympics in Montréal in 1976.

For 12 months out of the year I’m a mountain guide. That means skiing during the winter, and guiding expeditions and rock climbing during the summer. That helped me stay fit and healthy.

I did many runs before the World Run such as Death Valley, which was 100 miles. I ran Europe in the winter from Gibraltar to Norway, which was 4,375 miles; I ran from the southern tip of Argentina to Fairbanks, Ala. in what became known as the America’s Challenge, which was 15,000 miles; and I ran Italy to Milan, which was 1,100 miles.

Doing those activities my whole life helped me prepare for the world run.

Will: What was the longest you ran in a single day?

Serge: I ran 50 miles in one day, that’s a pretty long distance. I had to stop and think- if I have to keep running for five years and not just a week, it’s really stupid of me to try to do the maximum mileage I can do every day. Even if my body can keeping going, I quickly realized that I had to stop after a certain point each day, because I have to let my body recover for the next day, the next week, and the next year!

Will: Did you get injured at all along the way?

Serge: Of course. I say all the time that nothing is impossible if you accept to pay the price for your dream. And we paid a lot of price.

I had severe tendinitis. While we were in South Africa, I had to spend 28 days in bed to recover from it. I also had trouble with my sciatic nerve, and while running through India, a car hit me and I broke a bone in my right elbow. Nicole and I caught Malaria. It was bad for Nicole because she fell into a coma after she got a very bad fever. She had contracted one of the worst kinds of the disease. When I came down with it as well, I went to the doctor in Africa and he told Nicole that if they don’t give me a shot, I will die.

We encountered many situations along the world tour. In Africa, when we arrived to New Guinea that was exactly the night that 508 people were killed because of the civil war in that country. Women were raped and children were crying in the streets. We were lucky to be able to stay in the French and Swiss Embassy. Also, we traveled through the Middle East, four days after Sept 11. It turned out that our visas would not be accepted there because of the increasing tension in that area, so we were forced to change our course. Originally we planned to run through Egypt, Lebanon, Iraq and Kuwait. Instead we went through Egypt (Sinai Desert), Jordan, Lebanon, and Syria where we caught a plane and flew over Iraq and Iran and continued our run in Bangladesh.

Will: Was there ever a time you doubted yourself?

Serge: No, definitely not. I never think in my mind that we would give up- it wasn’t an option to think like that. I don’t want to be too proud, but I knew just one thing for sure- we took the risk to loose everything before we knew we would be successful with the first step. For us it was clear from the very beginning- we die or we succeed and we succeed!

Will: How did you manage your nutrition along the way? Did you have a special diet?

Serge: During the world tour, I didn’t have a special diet. For me this wasn’t a race. I didn’t have to beat some speed time. I was eating everything, everywhere, all the time. We also ate a lot of spaghetti and tuna. The hard part was eating good enough, because when you run 20-30 miles a day, you aren’t hungry. I never had a special diet. I think that is part of what I was trying to prove as well- that you can have a great, challenging, physical experience and use only what the world has to sell you. But, we paid the price for this because we had to visit several dentists all around the world.

Will: What is it about running that attracted you to want to use this as a medium to express your goal?

Serge: I didn’t choose to run around the world because I love to run so much. I do love to run, but I wanted to do something special and unique during my life. We live only one time.

We decided to run, because it would be such an incredible experience and maybe it’s a little bit crazy. Traveling the world by running is so strange and we knew we would encounter strange situations, but that’s what we wanted. We had so many amazing experiences because we ran. It wouldn’t have been the same if we would have traveled the world by car, boat or bike. When you run, nobody believes you, nobody trusts you, they look at you like you are E.T. But, I say, I would rather be a crazy, happy man than a boring man.

Will: How long have you been a runner?

Serge: I started to run when I began boxing at age 16. Like any good boxer, you run to keep in shape. I was running just five, six miles in the morning. After I stopped boxing and was a mountain guide, I was still running, but in a different way. I was running on an alpine trail and challenging myself for how fast I could reach the mountain cabins along the way. This trail connects six mountain cabins. A few years ago, I ran that trail in less than 18 hours, 44 miles with 20,000 feet of slope. It made me feel free. I used to do it with just a small backpack on and be gone for a week sometimes. After that I began running long distances more and more. Now I run just to keep in shape- four or five miles in the evening when I can.

Will: Did you ever run competitively in any marathons?

Serge: I did several races and marathons in Europe. My best time was 2 hours 31 minutes.

Will: You talked a little bit about raising money for children. Can you elaborate?

Serge: Yes, that is true. We raised money for International Vision Quest. If people want to donate they can go to www.internationalvisionquest.com

Will: What do you have in store next?

Serge: I have a big dream on my mind; I want to run on the moon!

Will: What does your wife think?

Serge: I haven’t asked her yet!

Will: She will have to have a different kind of motorcycle to support you up there?

Serge: Yes , maybe we reverse the role- I ride and she runs.

Will: I appreciate your time today, and I want to congratulate you for your accomplishment. It’s a tremendous feat what you have done. Thank you and I hope to meet you one day.

Thank you for this awesome interview Will!!! What an incredible journey!! It would be an honor to run with Serge someday!! I admire him for following his dreams.

LOL, how much did he raise for charity in the end? what's he up to now. a very inspirational piece!

Great interview, Will! And a super-impressive performance by Serge.

I love Serge's line "we took the risk to loose everything before we knew we would be successful with the first step."--a great attitude.

Thanks so much for postting it.

Chocoholic that I am, I particularly like the part about being able to eat whatever he wanted. :)

I wondered how old he and his wife are, and how old they were when they began this 5 year trip.

Did you mention that and I just missed it? I'll have to reread.

Great interview Will. Thanks for thinking of me. I'll pass it on to my dad. Serge has a legit marathon PR! What a cool dream into reality!

Will, you may have missed your calling. GREAT INTERVIEW! Serge is a stud. Thanks for sharing his story, it is truly inspirational.