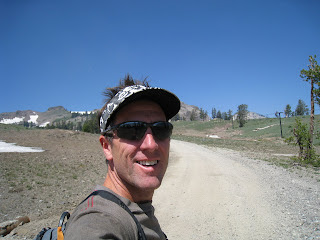 Hiking up to Emigrant Pass. Race Still On? 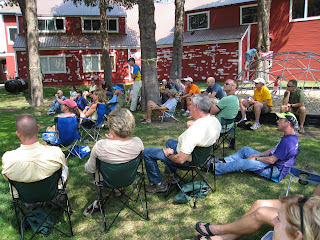 When I awoke his am, it appeared to me that the negotiation between the running gods and mother nature was progressing fairly well. Coffee in hand, I strolled outside around 7 a.m. From the base of Squaw, I looked up to the summit, which was not visible yesterday as it was shrouded in smoke. Today I could see it clearly, despite a light haze that still hung from the sky.

I jumped on the tram to high camp and hiked the rest of the way to Emigrant Pass. Again, the air seemed decent, and the visibility good as well. I could see for what seemed like 10 to 15 miles. The wind was also starting to gust a little from the west, and seemed to be pushing the soot over Lake Tahoe and hopefuly all the way into Nevada. At High Camp I glanced at the weather instruments and noticed the wind speed was 10 miles an hour, and moving the smoke along. Could the running gods be making progress? Is mother nature willing to concede the weekend to a few thousand people?

What hope I had was dashed at 3 p.m. today when we received a briefing from a Western States board member. “It doesn’t look good” was all I remembered from the “official” presentation. Off the record I heard there was only a 10% chance the race will be held. Fires are burning on both sides of the trial and they are not being fought by firefighters due the sheer number of fires still raging in Northern California and the lack of fire fighting resources. Access roads for crews are being shut down. We were told that we will be given a definitive answer on the race this evening.
Yea, I know yesterday I said “whatever happens, happens”. But that was before the nasty, poor, brutish and short reality was delivered to me today. I’m now trying to pick myself up off the floor. The Sierra Nevada in my hand makes that difficult. From my vantage point down here it would appear that the running gods are being outmaneuvered by the almighty, mother nature.

My fingers remain crossed. But my spirit is beginning to fade.

Quite effective material, thank you for the article.