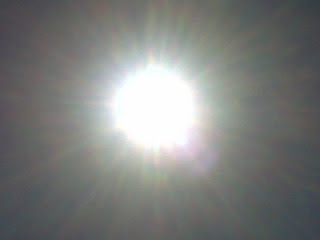 Just when I thought I was getting strong from my training for Western States, mother nature sent me a message:
"Tread lightly along this journey, don’t be overconfident, because you are in my hands now". This weekend I heard her message loud and clear.
The Western States 100 mile endurance run takes place on June 28th when temperatures in the Sierra Nevada Mountains can reach 110 degrees. During the race, runners must consume massive amounts of liquids to compensate for the amount of sweat the body excretes to keep its core temperature down. The challenge is to keep your stomach "working" while you push fluids, salt, gels and food into it while your heart continues to pump blood to the muscles and organs. This is complicated because an active stomach must divert precious blood supply away from the working muscles, or else it shuts down. If this happens, well, the game is over. Dehydration, hyponatremia, nausea, vomiting, heat exhaustion, and a host of other complications rear their ugly heads. Many a runner of great promise has been dwarfed by a failure of this simple, yet symbiotic relationship between the heart and stomach.
This weekend marked my first foray into heat training for WS 100. I had no plans, no strategic route to run. I just knew it was going to be hot and I needed to get out and run in the heat. This would allow my body to adapt to conditions it will face come race day. To date most of my runs have been in relatively comfortable conditions with no real mishaps. Something told me this was about to change.
Saturday, May 17, 2008: Seeking the sun at its highest arch, I started my run at 1:30 in the afternoon. It was 95 degrees when I left my house. I started with two 20 ounce water bottles, E-Gels, salt tabs and Cliff blocks. As I ran the first few miles up Buck Gully, I felt sluggish. My energy felt like it was evaporating from my body. I pressed on until I got to the hot, single track trail at Coyote Canyon.
As I entered the trial I noticed several black dots swirling around ahead of me. I continued up the trail until I was surprised by a loud buzzing in my hair. I looked up and I was in the midst of a swarm of bees. I turned around and immediately started running back down the trail while slapping at my head. I couldn't get the little bugger out of my hair! Then, just as I was expecting a sharp sting to the skull, I looked down and the little guy was stinging my arm. As if training for a 100 mile race in a heat wave isn't enough already! Note to self: did I really sign up for this program? 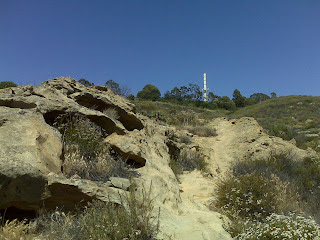 I continued on and on a more positive note, found myself the middle of beautiful Bommer Canyon which I hadn't run before. After I climbed out of the canyon I encountered another swarm of bees. This time, while they chased me for several yards, I turned before they established radio contact with my sauteed skin. With no other options I had to cross the 73 toll road to finish my run via the top of El Moro and Spyglass Hill. 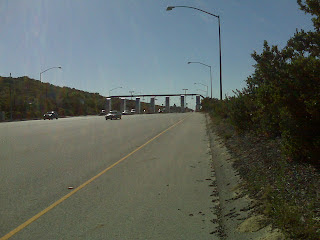 I planned on running Sunday with my WS pacer Rob McNair in Chino Hills. "You need to get into some radiant heat before Western" he kept telling me. This is heat that comes at you from all sides, the ground, the sky, the canyon walls. As if getting "cooked" on one side at a time isn't good enough. One must be "baked" on all sides to gain a real appreciation of heat.

So after spending five hours at my daughter's swim meet in 96 degrees of "radiant" heat, I met Rob to follow him out to Carbon Canyon, one of his recommended hottest places to run in Orange County. As we were driving I realized I forgot my shoes. Looking down at my flip flops, I had to make a choice: bag the run in Carbon Canyon, or figure out a plan B. I pulled over to a donut shop and, before Rob could lodge a single complaint, I told him to follow me, because the donut shop keeper informed me there was a Big Five Sporting Goods store two blocks away. I found my ASICS Gel Strive II's on sale for $49.95 in less than two minutes and we were out the door. 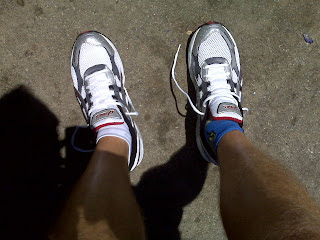 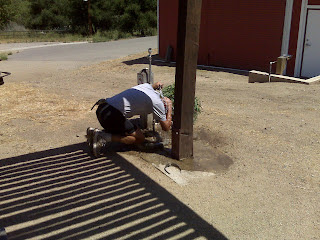 Carbon Canyon is nestled in Chino Hills and is an ideal place to run in sweltering heat. There is no shade and not a whole lot of breeze. We started the run with two bottles of water each. Since it was 12 miles to the next water stop, we had to conserve as much as we could.

Once we made it to the ranger station to refill, I was beginning to realize what it was like to be hot and thirsty. A good sign that my body was being tested. We doused ourselves to bring our core body temp down as much as possible. When we finally made it back to our cars, the temperature reading was 104 degrees. Total mileage for the weekend: just under 36 miles. All in all, two solid training runs in conditions similar to the grand trail coming June 28th.

UGH! You are a much bigger man than moi. Good job!

Holy cow. Is this what I have to look forward to if I want to enter the elusive world of ultras? You are way stronger than I will ever be. Have you considered a treadmill in a sauna?

Nice blog as for me. I'd like to read something more concerning that theme. Thnx for sharing that material.
Joan Stepsen
Escort in Cyprus

Cool article as for me. It would be great to read something more about
that topic. Thanx for giving this data.
Loanda
hotel Kiev escort

what is up with these bots?