As the sun began to rise over the San Gabriel Mountains on Sunday we were nearing the top of Mt. Wilson. Darkness was giving way, and across the canyon the ridge line began to glow from the gentle morning light. I asked Larry R to stop, just for a moment, to take in the view. Having run 85 miles and climbed 19,000 feet, he immediately took me up on the offer. As we stood there, we looked over a vast wilderness that, on this day, was his playground.

When I received Larry R's email asking if I would pace him for the last 25 miles at Angeles Crest this year, I replied right away. Of course I would. I had never paced anyone before, and I was looking forward to the experience of helping a friend and fellow runner get to the finish line.

I met Larry and his first pacer Simon C at Chantry Flats, mile 74.5. It's a good sign when a runner doesn't want to spend much time at the aid station, and we quickly began our journey into the forest toward Mt. Wilson. As the miles ticked away, I continued to look back at Larry. He never faltered. Over the mountains, in the canyons, even under the scorching sun, he remained determined and focused. His face said it all - stoic - like the Terminator. When I dropped the nickname on him, all I heard was "Get to the chopper!" 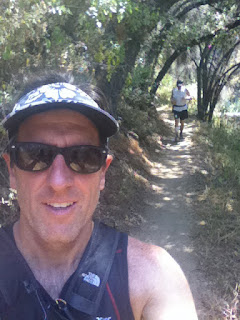 The only sign of trouble came when Larry asked the Idle Hour aid station crew for some assistance applying lubrication to his number 2 portal, noting it felt like he'd been gang raped by a freight train. Team sport notwithstanding, there were no volunteers for this task. He disappeared behind the pick up truck while I had another pancake. 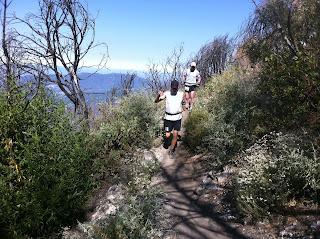 By the time we reached the Millard aid station, mile 95, Larry's time from last year's race was within reach if he continued pushing a little. I mentioned this cautiously, knowing just getting to the finish line is the primary focus of any 100 race. But as we got closer, I knew he was close to tagging a better time. I urged him to keep shuffling, and dangled a water bottle a few inches beyond his reach. "Keep moving," I bellowed. Of course, after running 98 miles, he didn't like any of this, and he started calling me bitch. I obliged by continuing.

By the time we made the last turn to the finish line, Larry could see and hear his crew, cheering. His son ran out to greet him. I looked at his face. For the first time the stoic expression that guided him through such difficulties began to fade. Then a smile emerged as he took his son's hand. They moved effortlessly over the grass to the finish line.

If ultra running is anything, it is a team sport, and the real competition is between your heart and mind. I've gained some of this wisdom in my races, but it wasn't until I paced a fellow runner for the first time that I discovered the essence of this about our sport.

Good work Larry. Thanks for asking me to be you pacer. I enjoyed every moment.

Great report - very funny bit about his tender number 2 portal! I'll be crew for a friend of mine who is competing in his first 100 miler in a few weeks time so I'll mention to him that he should bring a little cream!

enjoed reading this and the video as well. get to da choppaaa! lol

thanks gents...it was a great day. Looking forward to my next pacing assignment!

Great entry. Definitely elicited some chuckles. I'm looking forward to crewing for you (my husband) at UTMB on Aug. 31st!

Nice job Larry and as always Will you capture the essence of our sport. Peace and Have A Great Day! E

what a cool experience. i would love to act as pacer sometime, i can only imagine what a rewarding and memorable experience it would be!