Kids Will be Kids 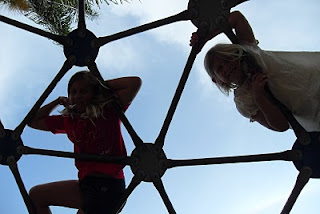 As runs go, I’ll chalk today’s up as an ad-hoc-zany-security-breach kind of run.  Ad hoc because when Rob and I started we had no idea where we were going. Crazy?  Maybe. But I love this kind of run.  It reminds me of when I was a kid.  Leave the house and just go.  Make it up on the fly.  Explore.  The only objective for me was to put down 23 miles.  Didn’t matter how.  Didn’t matter where.  Just get thru 23 miles…to get my 90 miles for the week.
Zany because we crossed over the soft grass of suburbia, in and out of a university campus, along green and yellow hills glistening with spring flora, over fences guarded by a city cop, into a gated community with 24 hour security, thru skin piercing thickets and loose scree, onto a 65 mph toll road, then back!  But I love this kind of run. It reminds me that I’m still a kid.  And this is MY playground!
Security breach because we jumped a fence right in front of an Irvine cop!  The cop was out of his vehicle.  As he stood waiting for us to pass by, Rob simply said “we’re going in”.  “In there?”, the cop replied, referring to the closed park on the other side of the fence littered with no trespassing signs.  “Yup”, Rob replied, and then he simply jumped over the fence and started running up the trail.  “WTF”?  I’m thinking to myself.  I followed my partner in crime over the fence, just waiting for a yell from the blue man for us to get out of there.  But there was nothing.   Not even a peep.
As we hurried up the trail, we stopped for a second to see if we were being followed.  Again, nothing.  Laughter ensued, with a few comments from Rob about how police have better things to do than chase down ultra runners.  But our jovial jog soon turned sour when we heard the sound of the cop’s SUV pulling up behind us.  Damn!  We almost pulled it off.  The boy-wonder-looking sergeant kindly asked us to turn our tails around and go back to where we came from.  Rob’s fence hopping gusto quickly turned to diplomacy as he tried to rationalize with boy-wonder why he should let us proceed.  “Proceed?  I could site you guys right now”.
But I love this kind of run.  It reminds me that kids will be kids.
at May 02, 2010

loved this. cracks me up what the police choose to enforce these days. hilarious.

these guys don't have much to do in Irvine! I guess that's a good thing...

Quite effective material, lots of thanks for the article.