I Went Back to Ohio 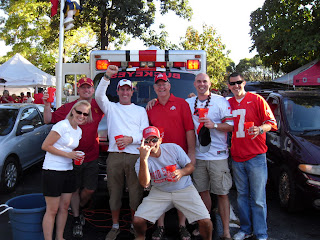 Last weekend I was taken by ambulance from the Columbus airport. Medical emergencies are scary, but being transported by ambulance only hastens that fear. As the ambulance rolled out of the airport I heard the siren begin to blare. 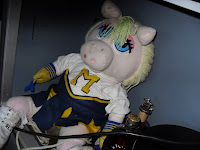 Thank goodness this was not your typical ambulance, and I was not suffering from a medical emergency. In fact the last emergency this converted rescue vehicle likely saw was a hang-over induced up-chuck, or maybe a failed satellite TV signal in the closing minutes of an Ohio state football game. Yes, this was a real life, fully functional ambulance converted to a modernized tailgating party wagon. Genius!

This was the kickoff of a weekend in Columbus, OH to see the Ohio State Buckeyes play the USC Trojans. But what do football and ambulances have to do with running? Absolutely nothing. Then let me dispense of the running thing quickly. I ran Coffman High School, which as it turned out was where the Trojan football team practiced before the big game. I ran a 1.5 mile warm up and 1.5 mile warm down, and 1,200 meters on the track including 100 and 200 meter stride outs, designed to help me get a little speed back after spending the last two years training for really long distances. 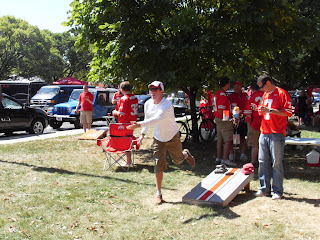 Even with such a short run, the weekend turned out to be as much an ultra marathon as any race I've ever entered. I don't care what kind of shape your in, because when you arrive seven 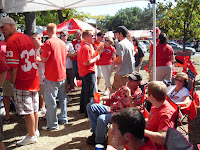 hours before game time to a tailgate party equipped with kegs of cold Pabst Blue Ribbon beer, cherries soaked in grain alcohol, cigars, and swarms of hardened Buckeye fans anxious to break a six game losing streak, fading down the home stretch is a real risk. I walked into Simon’s tailgate zone like a babe in a lawless saloon. I quickly loosened up with a few games of cornhole, the Midwestern version of horse shoes, a few BPRs, and then watched several college football games on the flat screen TV mounted in the back of Simon’s converted ambulance. 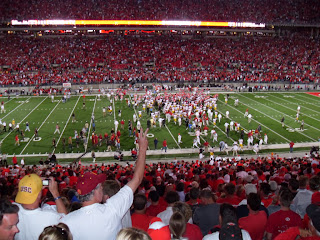 Pulling in the Sandbags

Then there was the game. USC and Ohio State have been battling each other for decades. I remember watching the epic battles between Woody Hays and John McKay as a kid. But this year, while the Trojans had beaten the Buckeyes in their previous 6 match ups, I wasn’t about to get sucked into this pre-game hype. Football is football and when you have a freshman quarterback, two new coordinators, and you’re in a rocking stadium with over 100,000 fans screaming at your team on every snap, anything can happen. So, whether staging for a Katrina size storm or a freaky high tide on Balboa Island, sandbagging has its place. Ok we won, but because we won I need to remind my Buckeye friends that while you have Tressel Ball, we have Carroll Ball. While you consistently beat weaker opponents, we consistently lose to them.

Thanks to all you guys, gals and tennis players for a great weekend and...we'll see you in the Rose Bowl!!!
at September 15, 2009

That looks like soo much fun!! An ambulance turned into a prty mobile! Holy crap! What a great time!

That was from Laura Weaver sorry...

Wow! You surely enjoyed your time there! Really great adventure! More fun times to you! Good luck on everything. By the way, these best gifts that you could give your better-half might interest you too. Thanks and have a nice and fulfilling day.

wow, what a cool idea! But sadly, my son has a totally different view of an ambulance these days. :(

Watching college football at home always seems like it would be such fun!!

I am glad you enjoyed your stay in my current hometown of Columbus, Ohio. My Cal Bears play your USC Trojans on Saturday night. It is going to be a wild one.

So, I do not actually consider this may have success.