When training for WS 100, I'm told that its best to spend time on your feet in an environment that closely matches the trail from Tahoe to Auburn. So when I said to ultra god Rob McNair that I was thinking of running American River 50 miler for a training run, he said, "why not Leona Divide. Its closer (3 hour drive) and has many more climbs like WS 100". I checked the website and found that, yes, this was no flat course (www.leonadivide.com/course_profile.pdf).

Rob and I drove to Palmdale the night before the run, picked up our numbers, and listened to the pre-race briefing. "The run starts promptly at 6 a.m., the starter is a little grumpy, so don't be late" we were told. We also got the run-down on the course, all the climbs, aid stations and other details. After reviewing the course eleviation profile and listening to the briefing, it was clear that this wasn't going to be an easy event. 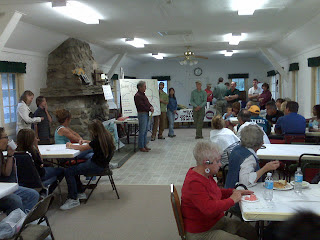 Pre race briefing by race directors.
Lining up at the starting line at LD 50 I kept thinking this is my first 50 mile trail run. I'd run Helen Klein 50 mile twice before, but that is basically a flat course. I bombarded myself with questions. How fast should I run? Should I have a goal time? I decided that these questions didn't really matter. What mattered was to just go out and run and get to the finish line.

As promised the gun was sounded, or, more specifically, a rusted circular saw blade was slammed with a hammer, promptly at 6 a.m. And just like that we were off and running under clear skies, with temperatures in the high 40's and gusty winds. Everything seemed to be pointing to an epic day. As I ran along the first several miles I found myself really enjoying things. The views in Angeles National Forest above Lake Hughes were spectacular and the company was great. A low fog was settling into the valleys under a bright sun rise. It was a majestic setting. I struck up a conversation with a really cool runner who said he had run his own 100 miler "just to see if he could do it". As we talked I learned this young runner's name was Nick Hollon. Nick is 18 years old and he simply loves to run ultras. I asked him if he ran cross country for his high school. "Yea I ran xc for the first 3 years but then I stopped my last year to do ultras". At Eighteen folks! Nick is running 100 miles on the track in May to raise money and awareness for Leukemia and Lymphoma Society (http://www.3000forthecure.org/).

After a good hour of running or so my stomach began to remind me that I usually don't eat massive amounts of pasta the night before a long run. I began to get that sinking feeling that runners sometimes get when they are up a trail without a porta-potty. At this point I was starting to look at bushes with a very strategic eye, but as the steps continued my "strategy" was rapidly disintegrating into panic. Suffice it to say I wasn't the only one out there with this dilemma. I found my bush and was quickly back on my way (yes, I carry extra paper for these type of situations).

The 50 mile course consisted of 34 miles on the Pacific Crest Trail and 26 miles on dirt road. There were 10 aid stations along the way and the trail was very well marked. It was probably one of the best organized races I've participated in, thanks to Glenda Kimmerly, race director and all the volunteers (thanks everyone!).

Another cool thing about today's run was I knew several of the runners, most of whom had come up from the OC or San Diego. Keira Henninger and I exchanged places on the course several times, offering each other hoots of encouragement along the way (she was coming off a win at Old Goats 50 mile the week before). It was also great to see Bill Ramsey, Gina Natera, Rick Fortini, Robert Schipsi, Charlie Nickell and Michelle Barton, many of whom I met at the Unknown Ultra a few weeks back. Rob McNair also introduced me to San Diego Bad Rat and WS 100 veteran Scott Mills (14 finishes at WS) who's story is illustrated in the book Running Through the Wall, Personal Encounters With the Ultramarthon.

All in all, it was a great event that I would like to come back to. My time of 8:38 was better than I anticipated and I can say that my base training made getting to the finish line under 9 hours possible. The only point of trouble was the blister the size of a New York steak on my right foot at the end of the race. I didn't even notice it until I took my shoes off. Now that this test is behind me I'm looking forward to sharpening my training with more intensity -- mainly hill repeats and track work. It's in the Book!

Sorry, but you'll have to cool it on the foot sex for awhile.

Dude, great time! Leona is a beauty, but also a bitch! Good work!

im a notorious for scrolling through blogs to look at pictures....

i'm so disturbed by the last pic :\

Found your blog through CRN. I am dabbling with the thought of some ultras after I get a few more marathons under my belt (injury-free). Many of my good running pals are ulta-ers, and I am always amazed at your stories. I will definitely track your journey to WS 100. Keep on postin!

You must have been really in the zone or a Zen master not to notice that HUGE blister on your foot! Have you determined how to be blister free next time? A bigger shoe? Body Glide or powder on your feet? Better socks? Enquiring minds want to know!

So, I do not really suppose this is likely to work.