Over a Field of Graves

This week I went for a jog in Washington, D.C., making my way to the mall where I wondered around my favorite veteran's war memorial. The following words are enshrined on the grounds there:


"Our nation honors our sons and daughters who answered the call to defend a country they never knew and a people they never met."

Do you know which war this was? I'll give you some hints... 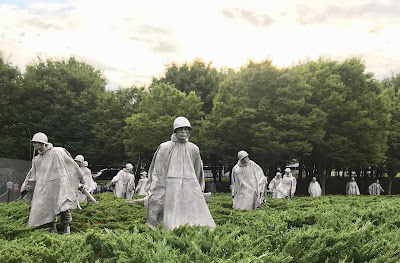 - The UN fought on the same side as the US there

- We nearly lost the war. Neither side won. An armistice was reached.

If you've never been to this memorial, make the trip. It is eerie and emotional as much as it is sobering. These figures are like a platoon of ghosts unwittingly marching over a field of graves.