Western States - "Gordy Will You Pace Me?"

"Have you been eating?" I asked Jukka as soon as he arrived at Forresthill aid station. "Not really," he uttered. We jogged in the dark toward the aid station then he said "I've had a bit of nausea." The next thing I heard was  a collective gasp. "Oh my god, are you ok?" a panicked voice blurted out from the crowd of volunteers. Jukka was flat out on the pavement, struggling to get to his feet. I quickly helped him up, blaming myself for mishap.

We sat him down on a chair at the aid station. A volunteer tended to the raspberry on his elbow while I tempted him with Forrest Hill's best: cheese quesadillas, pieces of PB&J, Coke, M&Ms...anything I could get my hands on. Jukka wasn't taking the bait.

Things then took a turn for the worse. Jukka, my chatty, happy-go-lucky friend from Finland, started to fade. His sentences were turning to gibberish, missing key verbs and consonants. Then his head slumped down between his shoulders. He was out. Unconscious (but still holding cup of coke I noticed.) "Medic!, Medic!", the volunteer yelled.

As a pacer you always feel responsible for your runner. No matter what happens, because a pacer's number one job it to keep his/her runner safe. I had been on the job for less than 10 minutes and my runner was already passed out. 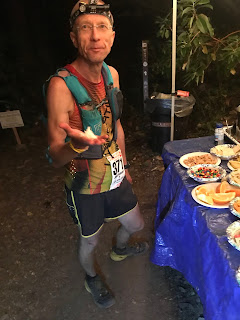 Jukka - getting calories during WS 100

By the time we got him to the medical tent Jukka was already showing signs of life. His gibberish was turning to jokes, which then turned to jousting with me. As I handed him another coke and quesadilla he reminded me that the only time I ran UTMB it was short course - 100k not 100 miles. Jukka did UTMB, but it was the full 100 miles. At this point I knew he was back in the saddle and ready to ride the bronco.

One of the hardest things for a crew and pacers to do during a 100 mile race is estimate the time the runner will arrive at a given aid station.  Jukka's second pacer and crew chief, Dreama W, and I decided I would pace him from Forresthill to Rucky Chucky near side, and she would take him from there to the finish. This worked great for me as I needed to drive to Santa Cruz for an event the next day. Timing when we would arrive at Rucky Chucky proved a little more challenging.

But Jukka still had to make it there first. After the "lights out" incident at Forresthill I was worried he wouldn't make it another mile. He was talking a good game after getting some calories back in him, but talk is talk. My job was to keep him safe. His job was to get to the finish line.

So we set out into the dark night and quickly found a nice rhythm descending the switch back trail. We came upon one runner and his pacer, then another, and another. Within an hour or two Jukka and I had passed a dozen runners, moving in sync on the winding single track trail. Jukka was back in the game.

Based on Jukka's pace for most of the day, I suggested to Dreama that we should be into Rucky Chucky around 3:30 am, or 30 minutes before the thirty hour cutoff. But that was before the "lights out" incident at Foresthill, which put Jukka back 15 minutes and much closer to the 30 hour cutoff. When we departed Forresthill, the more accurate estimate would have put us into Rucky Chucky around 3:45 or 4:00 am. But there was one problem. We got there at 3:20 on account of Jukka's resurgent running after leaving Forresthill.

As a runner, it's one thing to suffer through nausea, dehydration, stomach cramps, dry heaves or the many maladies a 100 mile race will throw at you. It's another thing to find your pacers in disarray.

When we arrived at Rucky Chucky the first thing I noticed was that Dreama wasn't there, not realizing we were early due to Jukka's fast pace. I walked through the small crowd looking for her. No luck. I then noticed Jukka had struck-up a conversation with the legendary Gordy Ainsliegh, the man who started Western States back in the late 1970's. Jukka was sharing our situation with Gordy. Gordy turned to me and asked why I couldn't simply pace Jukka for the next 20 miles to the finish line. I explained I had to be in Santa Cruz that afternoon and there was no way I could get there on time if I ran all the way to the finish.

Jukka was ready to set out on his own, but then he turned to Gordy, "can you pace me?" Gordy kind of chuckled. Then he paused. "I don't know why I didn't think of that?" It was totally surreal. One minute I'm running with Jukka on the Western States trail, and the next minute I'm pinning my pacer number onto the legendary Gordy Ainsliegh's shorts. I asked Gordy if he really wanted to do this. He was resolute.

It is said by many that things happen for a reason. That the greatest surprises in life come as part of a greater plan. If this is so, then Gordy was there to ensure that Drema would, after all, run with Jukka to the finish line. Because just as Gordy was walking down to the boats to cross the river with Jukka, Dreama appeared. And it was, maybe by destiny, the few minutes it took Gordy to get suited up to run, the exact amount of time Jukka needed to wait to depart with Dreama across the river.

Congratulations to my friend Jukka for finishing the Western States 100 mile endurance run. Thank you, Jukka, for inviting me to run with you. It was an experience I won't forget.

Thanks for pacing me Will! It was fun. Couldn't have finished without you.

I had a great time TP...was a lot of fun out there keeping you fed and in good spirits. Close call at Rucky!