Today I completed my obligatory 8 hours of volunteer service for Western States. While this was an obligation, it certainly didn’t seem like one. I chose to volunteer as a “trash collector” for the Orange County Marathon (what can I say…it was the only job I could find with a long enough shift!). Turned out I did a little more than trash collecting. I handed out finisher medals, carried signs, opened up boxes, stacked crates, moved pallets, lifted boxes, high fived runners, took photos, picked up trash, changed out trash bags…and ate some bananas. This was a very fun and enlightening experience. Having run some 14 marathons and several ultras, it was good to give back a little. 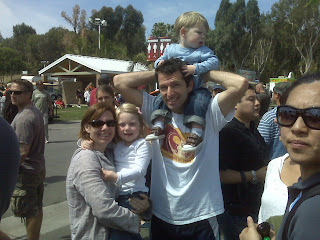 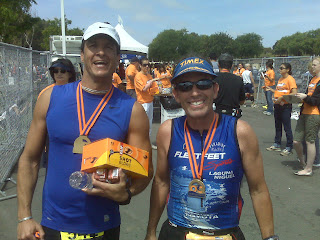 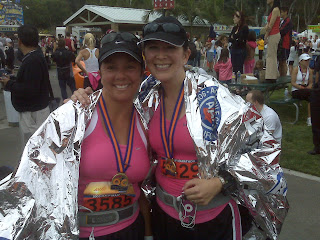 Another great part of the day was the people I met and the friends I saw, many of whom I haven’t seen a long time. Like Mike Friedle, a old running buddy who I shared the podium with (years ago) as a member of team Jimy Jamm, a misfit running team he and I were on that beat the Navy Seals 3 times at the vaunted Volkslauf mud run years back. Great to see you Mike, Chickie and kids, and great 5k run Mike! Kevin and Joe, who ran the Grand Canyon rim-to-rim-to-rim with me last November, both finishers of the marathon. Cindy Dabic and her friend Tory, finishers of the ½ marathon. Debbie Okano, who I haven’t seen for years but to whom I had the pleasure of bestowing a finishers medal for the ½ marathon. Great job Debbie! And of course the ubiquitous OC ultra crowd made an appearance, including the glamorous Greg Hardesty, Alexa, who captured a sub 4 hour pr, Kirk Fortini, running as the official 4:30 pacer for the event, and the Eveready Fred Pollard, our 69 year young Ultra Running Statesman who simply doesn’t know the word REST! He ran Old Goats 50 mile in March, Leona Divide 50 mile two weeks ago, PCT 50 next week and yes, my friends, Western States 100 mile in June. Rock it Fred! 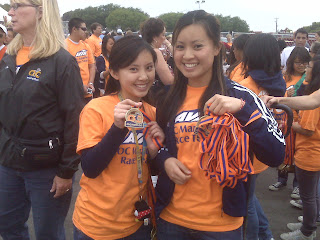 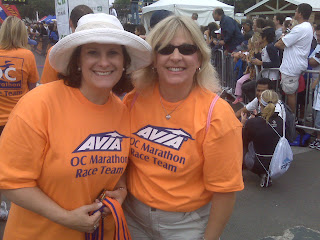 But meeting all the volunteers, I must say, was the biggest treat for me today. It started with Randa Helmers, Volunteer Coordinator “Extraordinaire” who, despite some tense moments, always seemed to have a smile lurking in the face of adversity. Kathy and Kelly, the always smiling sisters, Mayieanne and Kathy, the OC diva runners; there were simply so many people that made this event happen that, as a runner, I never realized but should have. Thanks to all the volunteers that shared the load with me today and made this such a great event for all the runners!

great take on being part of the race event, crew, and the amazing volunteers that are always there for the racers. Without the volunteers, the races wouldn't be possible! Awesome that you got to meet up with some old friends too!

Man I look short next to you....but sometimes it pays to be 5 foot nuthin' and a hundred nuthin', less to carry up hill....good to see you out there Will....K2

This is Rose writing from www.huliq.com. I visited your blog and liked your content.

Would you be interested to send us a guest post on any of the issues related to the topics that you cover in your blog. We will publish it in our site www.huliq.com

In return with each guest blog we will give one link in the author's byline back to your blog. We only ask that the guest post ( we prefer it be a news coverage, sources can be Google News, CNN, MSNBC, Yahoo News, BBC and others) be a unique story and not be published in your blog.

HULIQ is indexed by Google News and Google requires that the length of the unique news is at least 5 paragraphs. We desire it to be at least 6 paragraphs if possible. And that all need to be a unique content. Once you send us a new story totally unique we will immediately publish it with you link in it, and within 15 minutes it should be indexed by Google News.

Please let me know if you may have any questions about www.huliq.com.

If you want to consult the topic with me first that's perfectly fine as well.

Hey, there is so much worthwhile info above!