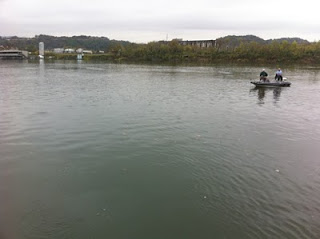 Sometimes just touching the water can be relevant.
at October 29, 2010

Did you know that about the river before you ran there, or did you research it afterwards?
I love that idea - running TO something :)

Suzan...I knew there was a battle there, but not much more. I found some detail on it after the run.

i'm excited to run the marine corps marathon around DC this weekend - it'll be like a history lesson on foot! great post : )

hey there, you were near my old stompin' grounds in Knoxville. The Tennessee River also runs through Knoxville (and right next to the UT football stadium - some people go to the football game by boat...the "Vol Navy"). And I've spent a fair amount of time boating, floating and swimming in that river. My sister lives in Chattanooga - not far from the river.

Good luck Rachel in DC. Heard that is a great marathon to do. Molly, thanks for Vol unteering that.

Thank you for your article ... All the best

Cool post. I like the idea of trying to see or learn something at every place visited.

well written. Glad I came back to stalk. ;)