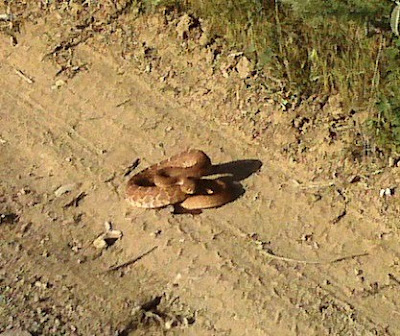 Dear fellow trail runners, its snake season! Beware.  I stumbled upon this Western Diamondback Rattlesnake this afternoon on a solo run in Blackstar Canyon.  I didn't even notice him until he sent a shudder down my spine with his intense rattle.  I was only a few feet away when I heard his warning and it scared the hmm hmm out of me.

Unlike other rattlers which can be lethargic or non-aggressive, the Western Diamondback will coil, rattle fearsomely, and stand its ground when threatened. And that he did! It bites hundreds of people a year, more than any other venomous snake in the United States. It hunts from late evening to early morning, crawling either sinuously like other snakes or rectilinearly like a caterpillar.


According to desertusa.com, "the Western Diamondback, especially the juvenile, often comes under attack itself. It may become a meal for an eagle, a hawk, a roadrunner or a wild turkey; for a kingsnake or a whipsnake; or for a coyote, a fox, a badger or a feral hog. Regarded as an enemy and a threat, it may be trampled to death by a deer, an antelope, a cow, a horse or even a sheep. The Western Diamondback lives in a rough neighborhood."

I think I'll be paying a little more attention to the trail in front of me now that it's snake season.
at March 23, 2010

Yikes!!! Um, not sure how'd I react if I came across that on a trail!! be safe out there!

I "ran" into two big ones like that last year, and already saw a small one out and about last week. I've heard that they are getting more aggressive in this area because their numbers are growing and they're running out of territory... who knows if that's fact. Disconcerting either way. Keep a good eye out like you did today!

Eeeks, I wouldn't like to encounter that on my runs. Luckily, here in suburban London (England) we don't have many snakes... But we also don't have the kind of spectacular scenery and wilderness that come with such animals!

Hello.. Do you wanna make link exchange with http://www.blogofsport.info ? Please let me know.. Thanks!

now you've got me worried. i've just moved into a new house in tanzania, and there are all kinds of poisonous snakes around. i've been running in the woods and on goat trails and the like alone, and the whole snake thing's kind of been in the far back of my mind.

now it's in the front. thanks. but am enjoying your site...

Asha, I this is the first rattler I've seen in a while...several years at least. It was a wake up call. Yang, snakes can make a scenery pretty dismal real fast...James, keep your eyes on the path! Keep it real folks!