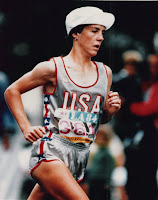 Let’s face it, it’s not about what runners are doing in America or Africa, it’s about what running means to Americans and Africans. Distance running doesn’t put food on the table in America. It doesn’t lift Americans from a poverty to prosperity. It doesn’t even make us national heroes. If it did, in my humble opinion, the tables would be turned.
at August 22, 2009

I agree with you that most Americans may not have the same motivation as the Africans, given our society's ideas about prestige and money. What talented athletes we do have may be attracted to better paying sports as well.

However, I do think there is some truth in what they say too. Read "Miles Make Champions" by Richard Englehart on Chuckie V's site http://chuckiev.blogspot.com/2008/02/miles-make-champions.html Richard talks specifically about this- about how exercise physiologists have done studies to determine optimal interval sessions etc., and publicized this. Coaches have seized on this new information and as a consequence people have gravitated toward lower mileage/higher intensity training and away from high mileage training altogether. According to this article, the qualifying times for the Boston Marathon have been increased over the years because not enough people were qualifying anymore. I had certainly wondered why the times changed- for women in their 20's, a 3:20 was required back in the 80's when I was first running, but now for the same age group all you need is 3:40.

As far as people training by Runners World and other similar magazines (intended to sell advertising), these parrot what the "experts" are saying. Many people are actually pushing for shorter higher intensity work saying it is healthier and advising against high mileage. I don't buy their arguments either- it's just the newest fad IMO. And if people think higher intensity training and intervals are what make faster runners, this is what they will focus on, and the newbies coming up through the ranks will never develop to their potential either. Maybe this is part of why American runners are lagging behind the Africans.

Athletes who win by only a few seconds on the line seem quick to point out the "reason" for their success.

By the way, I agree that motivation can make a significant difference.

I think you have a valid point here. Necessity is a huge motivator. There may be some physiological advantages as well to consider. Thought you would like to know that I gave your blog a big promotion in a Blog Catalog discussion on exercise. How Do You Make Exercise Fun BTW: I'm a runner myself (not ultra though)and am a fan of Dean Karnazes's book - Ultra Marathon Man. Great source of inspiration and discipline. Take Care.

Thank each of you for your cogent comments on a very complicated and debated topic. The more I think about this, the more I believe that Americans have been lulled into a very complacent state in endurance running. What we need is a shot in the ass, or a wake up call of sorts. This shot needs to be administered at the elementary school level. How can our kids expect to grow up to be marathon champions when they are being lobbied to play football, baseball, basketball or swim? My daughter is a competitive swimmer and she is only 10 years old. There are teams all around so cal that are bringing kids into the sport, training them, and putting them on starting blocks to go head to head at a very early age. Where are the track teams for this age group? Oh, yea, the don't exist. And so goes America's hopes for glory in the sport. Keep the faith runners!

No words of wisom from me about American and African runners. However, I would like to say that the food in your pictures looks absolutely delicious.

I certainly agree with you....Somewhat.

I think that the level of prestige achieved by African runners is absolutely a motivation that American runners lack. More importantly, the financial rewards are likely a huge contributor.

However, I can't honestly admit that I think these are the only reasons that Americans appear to be slower.

In my opinion, I think it's information overload. Runners of all levels are constantly looking for ways to improve, whether conventional or experimental. I think this leads to a lot of "expert" commentary earning extra weight and unworthy popularity, which then grows exponentially until eventually the market is saturated with these "tips" and athletes begin to search for the newer, improved methods, thus re-initiating the cycle.

That being said, I think that causes a reliance on scientific data as a metric rather than a good ol' fashion get-out-and-run attitude. In my opinion, American pros are over-thinking their strategies and training methods.

Quite effective info, lots of thanks for the article.