A Cup of Coffee in Santa Barbara 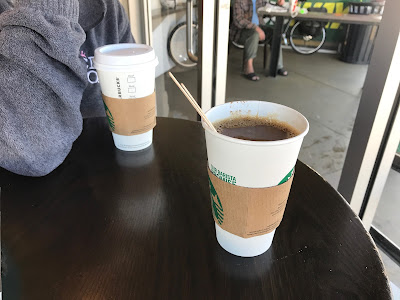 I’m beginning to realize something pretty simple. Something so simple I think it is fair to say that children understand it more than adults. Which is not surprising given our hasty, consumption based culture.

To describe this from an adult’s perspective would be logical but misleading, because the essence of it is usually lost by the time we enter adolescence and begin the journey fulfilling our unquenchable need to define who we are “supposed” to be while stumbling toward discovering who we really are. Caught between these competing forces, we are oblivious to all that pushes and pulls us toward achieving more, having more, and ultimately being more. I’m somewhere in the middle of this struggle. You?

But what is “it?” Well, like I said, “it” is pretty simple. “It” is something most of us are missing every day. I’ll leave this to your imagination. Let me know what you think.

Today, for the first time, I had a cup of coffee with my daughter in her new town Santa Barbara. It was a simple thing, which I’m learning is the important thing.