They were only halfway through their pasta when I asked them. I knew the answer before I asked, but I needed to hear it said out loud.

“So, what do you girls like better, playing in a game or practicing?” Their response was unrehearsed, harmonic, and matter-of-fact. “Playing the game, of course! We hate water polo practice. It’s boring. Games are more fun, by far.” My daughters stood up and walked into the kitchen. I just sat there staring at the empty bowl in front of me. I realized, it was time for me to play again. 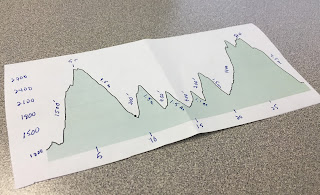 Described as “one of the toughest trail runs around,” the Bandit 50k takes place in the Santa Susana Mountains east of the Angeles National Forest. The course is challenging but runnable, boasting 6’500 feet of ascent with a good mixture of smooth and technical single track mixed in with fire road.

I’m not sure what is better, signing up for a race months in advance or showing up at the race directors home to sign up the night before. I think I like the later because any race director that invites runners into their home has this sport figured out in my book. I knew it was going to be a good race when I showed up at Randy and Sarita Shoemaker’s home after 7 pm and they happily gave me my race packet. They even recommended I eat at Hook Burger, which turned out to be a great choice for a pre-race dinner. 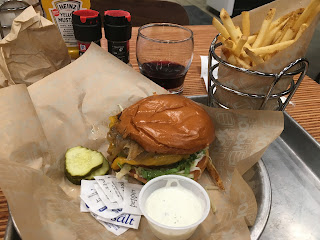 Oh yea, the race. It was a fun day! One of my most memorable moments was high fiving 16 year old Felix Lawson near the turn around close to mile 15. As I reached out I saw him slowly remove his water bottle from his hand so he could give me a proper high five. We exchanged a couple of “good jobs.” He went on the win the race. Yes, at all of 16.

As I approached the turn around, I counted the runners in front of me, then made the turn and caught a glimpse of those behind me. I’ve learned not to dwell on other runners when running these races, but it keeps it interesting to watch as things play out. Anything can happen, and it usually does. By this time I was running in 5th place overall. The runners in front of me looked strong, I tried not to think about the runners behind me.

As the first 20 miles ticked away, I felt amazing, and started to muse that I’d found some secret form of training. Then reality set in. My lower back, left IT band, and both feet (Hoka-less) started screaming like spoiled brats to slow down. I came upon my friend and former running coach John Loeschhorn who was running the 30k. At 71, John was running strong as usual passing runners half his age.

The Bandit Ultra races include 50k, 30k and even 15k distances. Despite a staggered start time, runners merge on trail after mile 20. It was several miles after when I gazed upon the top of the long climb in front of me and noticed one runner in the distance who looked familiar. Could it be the one I saw at the turn around? I put my head down and climbed.

When I reached the aid station at the top of the climb, I noticed the runner sitting down. Knowing most of the remaining miles were downhill, I told the spoiled brats to shut up and deal with it. They didn’t, so I tried my best not to listen to them. By the time I reached the finish line, my body felt like it was slowly disintegrating. But I kept it together long enough to finish in 5:07 for 4th place overall and first in my age group.

I guess I found my playground again.

If you have never run the Bandit Ultra Trail Runs, I recommend you give them a whirl. You won’t forget the misty clouds that float over the Santa Susana Mountains near the top of Rocky Peak. The race, which started in 2009, has that old-school ultra charm and is supported by a group of over 100 die-hard and enthusiastic volunteers. It must be why sixty-five percent of Bandit runners are “repeat” and come back to run the course again.
at January 31, 2016