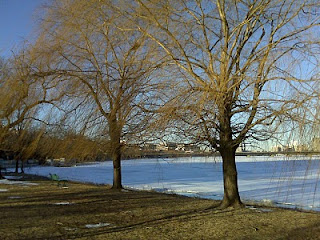 When snow was pelting the east coast this week, I initially thought my flight into Tuesday afternoon was a blessing.  Then I heard the temperature.  The low was supposed to hover in the single digits, somewhere between 5 and 8 degrees.  Hmmm….I wasn’t quite sure if I was the weather guru or the simple fool, having brought along a snow cap, gloves, warm-up pants, long underwear and warm socks.  Prepared?  Yes.  But do people really run in 5 degrees?  I managed a nice 5 miles on a tread mill Wednesday morning.
I was booked to fly onto Wednesday evening, right smack into the heart of one of the worst snow storms in recorded history.  As the day progressed, I found out thousands of flights were being cancelled as snow battered Washington D.C and .  Sure enough, my flight was cancelled too.  I was minutes away from aborting my trip to the east coast altogether when I learned I was now booked on the only flight into Wednesday night.  Yea, right.  Like this plane is really going to fly into the middle of this raging monster when no others would dare.  I started making plans to spend another night in .
But as the clock ticked closer to the 6 pm boarding time, I kept checking for a cancellation notice.  Nothing.  I started making my way to the airport.  When I arrived I quickly looked at the departure monitors, sure to see a big “Cancelled” next to my flight.  Nothing.  Come on guys, now you’re going to make me go through security and walk all the way to the gate, only to tell me my flight is cancelled like the thousands of others into .  But as I approached the gate, it finally hit me.  This plane is going to take off.  And I’m supposed to be on it.
“We are scheduled to touch down at 11:45 p.m.” the pilot announced.  “But it could take longer because we’ll probably be in a holding pattern for a while due to the storm” he added.  Great, I thought.  We are taking off and we don’t even know if we can land!  In the end, we made it.  And when we touched down, the entire plane erupted in applause.  I was making my way off the jetliner and I heard one of the ground crew saying our pilot was a hero because ours was the only plane that landed that night.  Nice.
As I was running through early Thursday morning, it dawned on me that, as runners, sometimes we just have to “get through it”.  Be it snow storms, cancelled flights, late-night arrivals, just “getting through it” means simply lacing up our shoes and getting out there.  Then comes Friday morning, and I’m now in , running next to the frozen .  The sky is clear, and the sun is rising in the blue sky.  I made it over the bridge to , where I get my first glimpse of the MIT campus.
As I’m heading back,  a youngish college kid runs by me at a good clip.  I shuffle along, taking in the scenery.  Not knowing, my feet begin turning over a little faster.  Now a couple hundred yards ahead of me, I notice the youngish one isn’t taking any more ground.  I’m gaining ground.  I look down at my GPS.  7 minute pace….6:45, 6:30…Now I’m shadowing him by a few yards.  Ok…feet.  When he looks over his shoulder, his pace quickens.  My stride is steady.  I quietly pull up next to him, listening.  I hear labored breathing.  With miles in the bank, I gently shift into the next gear and begin to separate.  My legs carry me now.  Yes.  These are the moments.
Getting through it.
at February 13, 2010

Love the passing of the college kid story. All those miles in the bank do pay off!
Aah, as for the snow, tis sweet to remember on what was hard to endure.

Central Park was sweet after that storm was it not! Sorry we did not catch up. Peace

Glad you made it...and yeah, that is definitely one of those moments :)

Nice story about catching up to the college kid! Glad you made it through the snow ok with your flight.

Will, what a great post! Your commitment is inspiring and the way you found your zone while running with a younger person reminded me of this wonderful film I think you'll really appreciate. "Mr. Jimmy's Birthday Challenge" is the story of an 80 year old man who decided to run 80K for his 80th birthday after he lost his wife. The entire community joined in. Kate

Speaking of crazy check out this product that increases your Vo2max and Vt from 12 to 30% www.longlife4you.teamasea.com