Hydration for the Long Haul

After suffering through a miserable cold this week, I finally decided today to set out on trail, feeling well enough for the first time in several days. I used to run with a cold all the time, but found that doing so gave the virus easy pathway to my lungs. Not that I’m 100% yet, but I’m well enough to get out under a crisp blue sky and sun drenched trees.

I’m pretty sure today was the longest time I’ve spent on foot on a single run since Western States. Total time logged was 4 hours and nine minutes, which felt like butter for the first 2 ½ hours, while I stayed well below my max aerobic heart rate, climbing gently up San Joaquin Hills road and under good shade, until crossing over to the Coyote Canyon trail that parallels Ridge Park Road. Along this trail, which sits in the heart of Newport Coast but is unused if not unknown to most, the fall shadows loomed over the rocky terrain and ancient caves. Fall is most certainly here and with it is a brand new season to explore.

One of my objectives today was to go the distance self supported, without refueling along the way. I want to know how long and how far I can run without a water source, and what kind of equipment I can reasonably carry on a long sustained run. The system I used a few weeks ago, a Patagonia hiking pack with 120 ounces of water, a sleeping bag, a mat and bug net was a disaster and I don’t know what I was thinking when I started up Holly Jim trail. Sometimes naïve enthusiasm can carry you a long way, and it did, until I realized I couldn’t run in the contraption without the bag bouncing up and down more than a worn out Cadillac hurling over massive speed bumps. 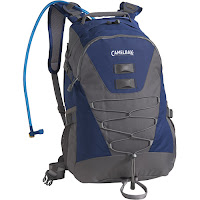 Thanks to a fellow ultra runner and blogger Ian, I realized that they actually make bags for runners that can carry this kind of gear and water. I purchased one he recommended to me, the Camelbak Rim Runner, which holds 100 oz of fluid (3 liters) 1590 cu in of cargo. I loaded the bag up with about 80 oz of water, some bars, a sweatshirt for girth, and set out on trail. They bag worked great, had minimal bounce (I’m still trying to get used to Camelback because I’ve been using a Nathan hydro pack for over a year), and I made it the full 4 hours without having to stop for water. I felt so great around 2 hours that I called my wife and said I was going to be out for a couple more hours.

From the top of Newport Coast, I dropped into El Moro State Park along the Fence Line and Missing Link, and over to Laguna Coast Wilderness on the southern most ridge, and then down to Laguna Canyon Road, and back via the Ranger Station hill. The climb out, well, was not so fun and the butter it felt like earlier was beginning to curdle inside of me. Oh how I miss these long runs!
at October 25, 2009

glad you like it!
now you can get out there for days... funny, i just bought a nathan hp020 at the end of the season to use in races next year.
cheers,
ian

Ian, thanks for the tip. The rim runner is great, will hold what i need. How do you like the Nathan?

Glad the Camelbak Rim Runner worked out for you and you had a good run.

it feels good. the straps are not adjustable for width on the shoulders which would be nice.