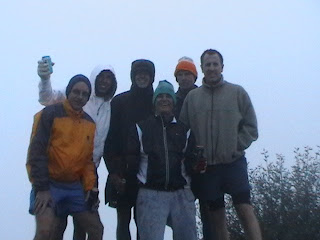 On December 13, 2008, seven of us touched the Pacific Ocean then turned around to run to the top of Saddleback Mountain. The fifth annual Saltwater 5000 returned to the original 32 mile course via Modjeska Grade and the favored Joplin trail. The run was held under darkened gray skies that offered not a mere glimpse of the sun.

To use a Hollywood analogy, this year's Saltwater could be dubbed a cross between the Andy Griffith Show and the Great Race. I've never been a huge fan of law enforcement, but there's always been a little place in my heart for Barney Fife who couldn't bring himself to stop a crime, let alone arrest someone. This year we were "caught" trespassing in the former mobile-home park, now a construction site, on PCH. A pick up truck rushed up the road to stop us as we were about to enter El Moro park. Yet out of the truck came a Fife-like little man. "You are breaking the law, get over here right now!" he clamored. We explained to him we were just going for a run. After he told us he was a project manager with utterly no law enforcement authority, we simply turned around in front of him, crossed the fence and were on our way.

Yet this run-in with Fife-law took its toll and, ultimately, claimed an early victim in this year's Saltwater. As we ran up El Moro canyon, everyone was feeling a little jacked-up, and I noticed the pace was quicker than usual. Leading the pack most of the way was the returning, original Saltwater runner Bino. In full winter gear amidst a balmy 55 degree morning, the Bean deftly shed a piece of garb at every turn, ultimately carrying more clothing up the hill than a Yukon bag lady. We continued in good form down through the beautiful Marie Calendar trail, under the toll road and made our way to the first aid station at Bake. Call it nerves, pressure, or the just the sheer weight of a breakfast burrito, it became vividly apparent this would not be Bino's day. To my right I only saw remnants of Beano's formal exit from this years Saltwater. Others weren't so fortunate and watched real time. Now six, we collected ourselves and pressed on.

We were not more than a mere 1/2 mile down the road when we had another a Fife-like experience. "Use the cross walk" came the words over a megaphone. As Damron and I were j-running across Bake we glanced over to see an Irvine Police squad car surveying our every step.

We continued up through Sorrano Creek trail to the skate park, our next major aid station. This was a welcome site, with all the support crew on hand. But the sky was growing restless and the temperature was starting to fall. We decided to keep on the move to stay warm and somehow avoid the looming rain. It was at this point that I realized I was bearing witness to Saltwater's very own Great Race. Just like the Tony Curtis and Jack Lemon dual that pitted the "good" guy against the sly opponent in a race across America, there was a dual to the top of the mountain between our two most senior runners Jerry and Jeff.

Jerry and Jeff usually face off on the favored Joplin Trail, which bring all of us literally to our knees at least every year. In the past few years, Jerry has maintained the upper hand. But this year would see a change of fortune, with an interesting tactic. Breaking a sacred Saltwater tradition of waiting for the other runners at various checkpoints, Padilla made it clear he was not going to wait around for anyone in the cold weather. So as the pack rolled into the aid station at Modjeska, Jeff took off 8 minutes ahead of everyone else.

The rest of us then embarked up this laborious climb, and we started to split up pretty quickly. Thankfully Kevin met us on his bike at the trial head to escort the group up to Old Camp. At this point I kept looking for Padilla, expecting to see him up ahead at every turn, but to no avail. I finally put my head down and took off, determined to catch him before old camp. It wasn't until a mile from Old Camp until I finally caught him. Rob was there with me in tow. When we reached the campground Rob and I decided, by tradition, to wait for the last runner to come in before we embarked up Joplin. Jeff, on the other hand, continued on, not wanting to give up any time (or warmth) in front on this steep and punishing climb. Thirty-five minutes later all the runners had arrived and we began the march up Joplin. Within a few hundred yards I overhead Ramsey ranking Joplin as a negative 8 on the suck list. Shortly after that I tripped as I trod on this trail of stones. Yes, it was good to be back on Joplin.


In all six runners reached the top in the fifth running of Saltwater 5000. Included in the six were four five-time runners (myself, Rob, Jeff and Jerry), one two-time runner (Jeff D) and a first-time runner (Bill R). Supporting us was a host of gracious people, including Al, Rob, Cindy, Trina, Kevin, Marshall and Dawn. Thanks guys and gals for your support, we couldn't do this thing without you!.

congrats guys!! Jennifer and I were running at El Moro yesterday morning and wondering if we'd see you. Good day for a run (especially since it didn't rain).

That looked epic, thanks for sharing. I thought of you guys all day long as I coughed up my lungs. Between coughing fits I could be heard wheezing "I should be out there." I missed out and am very bummed that I have to wait a year till the next one. You guys rock!